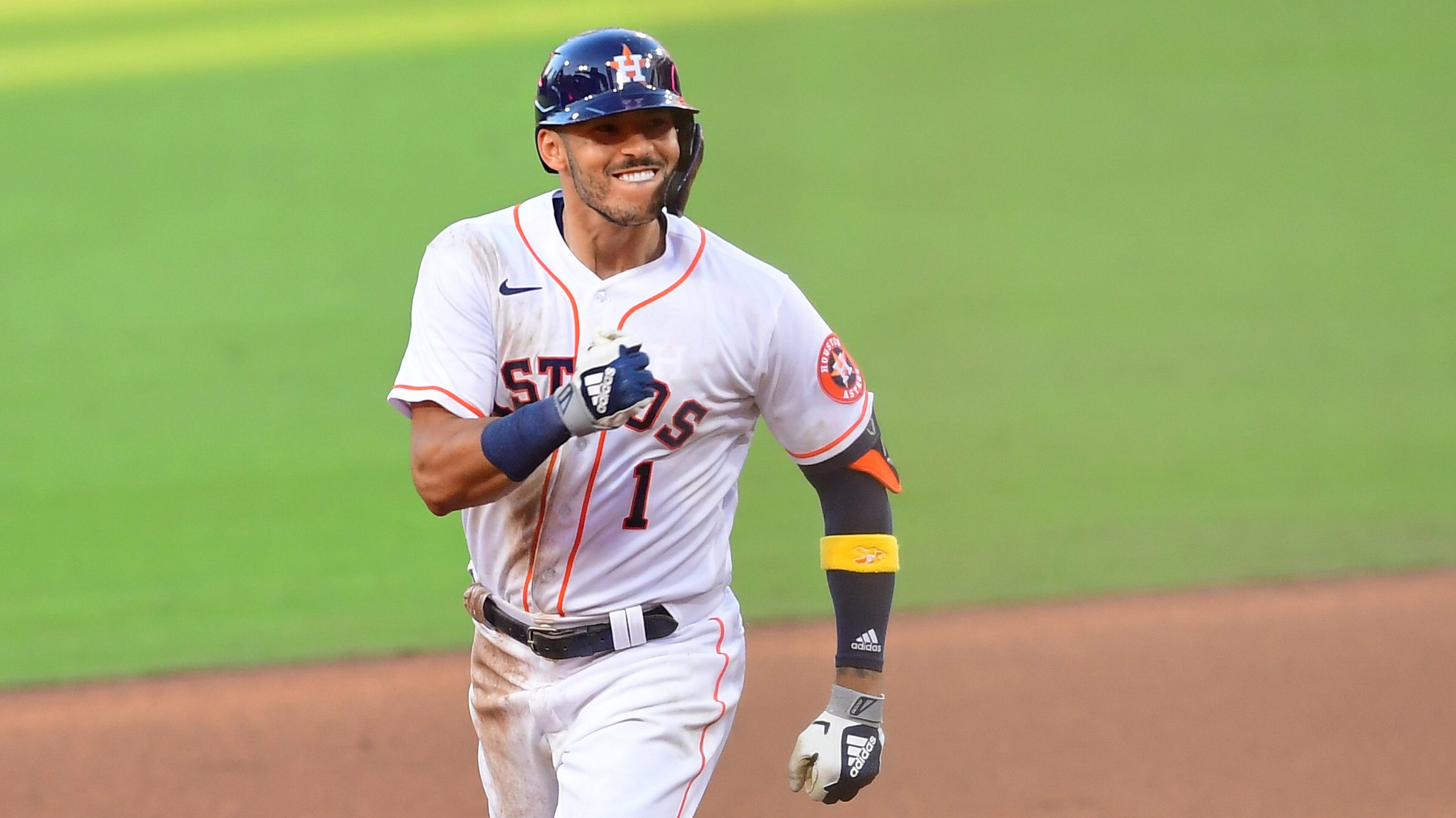 All year long, the impending free agency of star shortstop Carlos Correa has hung over the Astros like a cloud. Unquestionably one of the most important players on the team, Correa is still very much in his prime (he just turned 27) and is in danger of suiting up for some other team next year. Houston simply can’t allow that to happen.

GM James Click said the team is respecting Correa’s wish to not discuss a new contract during the season, so nothing will happen for at least another month or so. There were some extension talks before this season started, but the two sides never got anywhere close to an agreement. The team’s reported offer of five years and $125 million is simply not going to get it done.

The Astros supposedly don’t give out the kind of long-term contract Correa is seeking, and in a sense that’s wise. How often do free agent deals of seven years or more actually work out? The Max Scherzer contract with the Nationals and the Manny Ramirez contract with the Red Sox worked out pretty well, but those are exceptions. But these are special circumstances.

Rules Are Made to be Broken

Correa himself may be another exception. For one, he’ll play the first season of his new deal at age 27. It’s not often that a player reaches free agency at such a young age, so whichever team signs him will be paying for more prime years than they would otherwise get from a typical free agent. They could very well get the best years of Correa’s career.

He’s also in the midst of an excellent season, as he’s already accumulated 6.9 WAR per baseball-reference, nearly matching his career best. He’s combined a strong .282/.367/.486 line with his Gold Glove-caliber defense at a premium position, and he’s displayed a knack for coming up with clutch hits. Beyond that, he’s also a real leader in the locker room.

It’s not often you find a player of his age who plays stellar defense at shortstop and brings a well-above average bat. He may not be the 40-homer Alex Rodriguez clone some thought he would be, but it’s hard to find a shortstop with both a strong glove and a strong bat. Usually you have to sacrifice defense for a good bat (Corey Seager) or accept an anemic bat for a strong glove (Andrelton Simmons).

Astros Can Afford It

I can understand the Astros hesitancy about giving out the kind of deal Correa is seeking, but here’s a legitimate question: If you don’t pay Correa, where else are you going to spend all that money? For luxury tax purposes, the Astros have less than $100 million guaranteed on the books for 2022. Having the huge Justin Verlander and Zack Greinke contracts expiring, plus Correa’s salary, opens up a lot of space.

Granted, that figure does not include arbitration-eligible players such as Aledmys Diaz, Framber Valdez and Ryne Stanek, nor does it include pre-arb players (who are unlikely to make much anyway) or Yuli Gurriel’s $8 million club option. We also don’t know what the luxury tax threshold will be next year or if there will even be one, given the CBA’s expiration after this season. But regardless, the Astros will have ample payroll space to work with.

If they don’t use some of that to retain Correa, it’s unlikely they’ll spend big on another free agent like Seager or Trevor Story. Marcus Semien may be pricing himself into that upper tier with his 40-homer season in Toronto. Someone is going to overpay for Javier Baez based off his glove and the occasional home run, but they’re going to get a low batting average and enough empty swings to air condition a stadium. None of the other free agents really inspire much excitement.

The Astros might be betting on top prospect Jeremy Pena, who is on an absolute tear at Triple-A. After missing most of the year with a wrist injury, he’s hitting .341/.393/.683 with eight homers in 20 games, though that’s not a large enough sample to trust him to run away with the job next spring. His glove is undoubtedly ready, and he’s a plus baserunner, but there are questions as to whether he’ll hit enough in the major leagues.

The Astros aren’t going to shift Alex Bregman over to shortstop, and Diaz is not a strong enough defender to play shortstop on a full time basis. Pedro Leon has played some shortstop, but they’re not going to turn the position over to someone who didn’t play it until this year. If their intention is for Pena to take over, they’ll likely need a stopgap to start for part or all of next season. In that scenario, neither the stopgap nor Pena are likely to replicate the kind of offensive production you’ll get from Correa, and you already know the value he brings defensively.

And here’s the thing about prospects – they don’t always pan out. Pena could turn out to be a Gold Glove shortstop who hits .290 with 15 homers and 20 steals a year, or he could hit like Adam Everett and be a career utilityman. Betting on Pena is a risky proposition when you have the financial means to keep one of the game’s best all-around shortstops in Houston for the long haul.

Again – Where Do You Spend It?

This goes back to my earlier question – where do you spend all that payroll space? Assuming the Astros exercise Yuli Gurriel’s option, shortstop will be the only position in the starting lineup that will be open this offseason. Even with Verlander and Greinke leaving, the rotation is set with Lance McCullers, Valdez, Luis Garcia, Jose Urquidy and Jake Odorizzi with Cristian Javier and others available for depth.

The bullpen could use some help with Kendall Graveman and Yimi Garcia hitting the open market, but it’s not like the Astros are going to drop $50 million of payroll space on relief pitching. This is one of those rare situations where a team has a good deal of payroll space and has very few needs to fill. It’s the perfect opportunity to spend big on a shortstop, so you might as well spend it on the guy who’s already a great fit in Houston.

It’s true that players like Valdez, Yordan Alvarez and Kyle Tucker will eventually get expensive, but signing Correa doesn’t preclude the team extending any of those guys. Bregman and Jose Altuve are under contract through 2024, at which point Altuve will be heading into his age-35 season and probably won’t earn as much on his next contract. There’s payroll space to be had in the future, with or without a large Correa deal.

And speaking of Altuve, since Jim Crane took over, he’s the only homegrown star the Astros have retained into what would be his free agent years. McCullers is set to become the second when his extension kicks in next year, but Dallas Keuchel, George Springer, and Marwin Gonzalez were all allowed to leave. Other fan favorites like Gerrit Cole, Charlie Morton, Collin McHugh, Will Harris, and Brad Peacock are gone too, and Verlander and Greinke are soon to follow. That’s a lot of turnover.

The Altuve-Correa double play combination could be this generation’s Biggio-Bagwell combination. There are other important players around them, but those two are the franchise faces and leaders. It’s a partnership that deserves to last for several more years. Retaining Correa would allow Click to sell high on Pena to fill other needs, and it would make the fans happy after seeing so many players leave over the last few years. Crane and Click simply need to pony up and make it happen.

In this article:carlos correa, Houston Astros