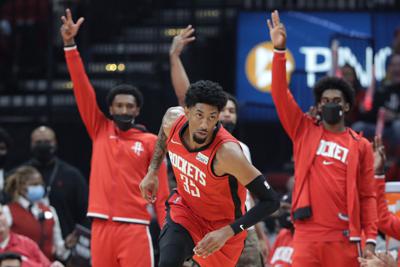 The Houston Rockets are 1-7 that’s not a record a team will pound their chest about and be happy. The Rockets, though, are right on schedule. Through eight games, the Rockets have shown that they are a young, talented, at times frustrating,turnover-prone but exciting team.

Opening night was an example of how much work the Rockets had ahead of themselves this year. The Timberwolves harassed and bullied the Rockets from the tip to the final horn. In a win vs. the Thunder and close losses to the Celtics, Lakers, and recently the Suns, we saw the talent and potential that has a lot of Rockets fans excited.

The Houston Rockets turn the ball over a lot (worse in the league in turnovers per game). They are unsure and hesitant at times on offense. They go for long stretches where they can’t make a shot and have prolonged defenses lapses. All of this is true, but the Rockets also, as mentioned earlier, have talent and plenty of potential. Here is why despite the record, the Rockets are precisely where they should be to start the year.

Christian Wood is proving he can be an All-Star for the Houston Rockets.

Coming into this season, it was a lot of chatter ( Rockets Twitter YOU KNOW WHO YOU ARE) about rather you should try and maximize Christian Wood trade value. The argument was that he would be looking for max money in a couple of years, and he is not worth it and doesn’t fit the current team timeline. Those concerns are not without merit, as Wood will be looking for a big payday once his next contract rolls around. However, what negates a lot of the concern is that Wood has played at an All-Star level since his arrival in Houston.

Last year as we all know, Wood was on his way to a possible All-Star game appearance before his significant ankle injury in March. This year has seen Wood pick up where he left off last year. This year, Wood averages 19.9 points, 12.5 rebounds, has career highs in minutes and assists per game. Wood is also shooting an outstanding .383 percent from 3-point range.

Wood is the exact type of a player a rebuilding team needs. He is in his mid-20s, versatile, and is about making the team better, not just himself. Wood is the Rocket’s best player, and that’s exactly what he should be at this point of the rebuild.

Kevin Porter Jr. shows flashes of brillance but still has work to do

When the Rockets traded for Kevin Porter Jr last year, and it was reported that he would be converted to point guard, the excitement was through the roof. His time in the G League did nothing to change that with his 50 point masterpiece vs. the Bucks. However, this year reality has set in. Playing point guard at the highest level is not easy for anyone, especially a (virtually) rookie point guard.

I am sure you are saying “rookie”? Porter Jr is not a rookie in terms of years in the league, but as a point guard, he has played less than a half of an NBA season. Porter Jr is averaging over 5 assist a game and over five turnovers, not precisely the split you want from the point guard position. That’s the problem though Porter jr is not a traditional point guard.

When evaluating Porter Jr., you have to factor in he is a scorer first and a facilitator second, and in today’s NBA, that is perfectly fine. However, there have been flashes of his potential as he has shown to beat anyone off the dribble. In addition, Porter Jr has shown excellent court vision at times, making pinpoint passes to cutting teammates.

There have also been games where he turns the ball over and is hesitant in running the offense. This is exactly where Porter Jr should be eight games into the season. He will make mistakes but will also show why he is a dynamic talent. This is part of the growing pains of a team with seven players 21 years or younger. But Porter Jr, just like the Houston Rockets, is right on schedule.

The number 2 overall pick has been as advertised. The shooting has been subpar, that is true, but the footwork, balance, and explosiveness have been on full display as well. Green, through eight games, is only shooting 35.7 percent from the field and 32.2 from beyond the arc. Those aren’t numbers to get excited about on the surface, but this year isn’t really about numbers.

This year especially for Green, is about refining his overall game. From knowing how to play angles to get by defenders. To come up with counter moves when defenses game plan to stop your initial move. This year especially earlier, is about adjusting to the speed of the game. Green has mentioned several times that he is only 19 years old playing against grown men. This should always be taken into account when evaluating teenagers playing at the highest level.

In Green 30 point game vs. Boston and 24 points vs. the Lakers, he showed all the tools that made him the number 2 pick. The beautiful jump shot, the quick first step, and out-of-this-world athleticism. We are only eight games in, and we already see the makings of a future scoring champ. Does he have areas of his game to work on, of course, but at this point of his career, he is exactly where he needs to be improving every game.

The Rockets are in year one of their rebuild. Yes, it started last year after the Harden trade, but this is the first full year of the process. We have seen some low moments. The blowout loss to the Timberwolves, a lot of turnovers, and an inconsistent offense. For instance, there have been high moments, the play of Alperen Sengun, who has been the steal of the draft. The play of Jae’Sean Tate, who does everything on the court for the Rockets. Also, the fact that the Rockets never quit, they continue to play hard despite the score.

This is what you will get all year from the Houston Rockets, and so far, they are exactly the team they should be eight games into the season.

For all your Houston sports merch, blogs and podcast check out apollohou.com!