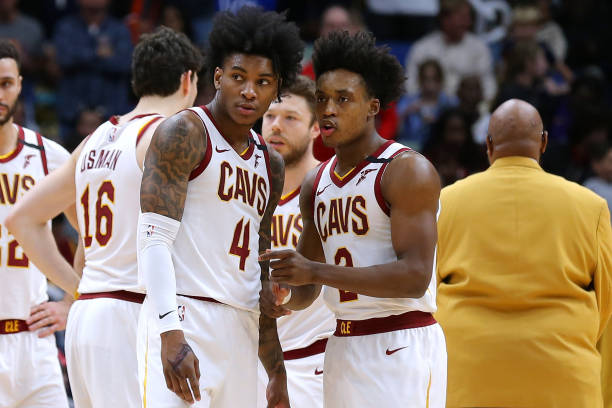 NEW ORLEANS, LOUISIANA - FEBRUARY 28: Collin Sexton #2 of the Cleveland Cavaliers and Kevin Porter Jr. #4 react against the New Orleans Pelicans during the second half at the Smoothie King Center on February 28, 2020 in New Orleans, Louisiana. NOTE TO USER: User expressly acknowledges and agrees that, by downloading and or using this Photograph, user is consenting to the terms and conditions of the Getty Images License Agreement. (Photo by Jonathan Bachman/Getty Images)

In recent weeks, numerous rumors have been popping up suggesting that Collin Sexton, the Cleveland Cavaliers guard who is out for the season with a torn meniscus, may be available in a trade. Prior to his injury, Sexton was in the midst of a career year. At just 23 years old and in his third season, he was averaging over 24 points and 4 assists per game on decent efficiency. The Cavs were struggling at the time, but Sexton was proving himself as a more than capable NBA player.

But today, the Cavs are fielding a highly competitive roster. They are currently the 4 seed in the Eastern Conference and are coming off a big win against the Brooklyn Nets. Some are suggesting that the team should look to move Sexton to find players who can give them more help in the playoffs…

Could the Houston Rockets be a potential trade partner for the Cavs?

On one level, it seems hasty to trade Sexton. Yes, the team has been playing great over the past month or so, but they have not nearly reached their ceiling either. Cleveland’s two best players, Darius Garland and Evan Mobley, are just 21 and 20 years old, respectively. A recently-turned-23-year-old Collin Sexton would seem to fit in perfectly with the timeline; the Cavs have plenty of reason to wait for Sexton to return from injury, let the current roster grow together, and see how far they can go.

It’s not like the injury is expected to impede his development, either, so the question remains: why would the Cavs – a young, soaring team in the Eastern Conference – trade one of their best and youngest players?

Well, to start, I just never got the sense that the Cavs were big fans of Sexton. Every year, we seem to get some anonymous report about how certain teammates don’t like him because he’s selfish, or how the Cavs don’t (or shouldn’t) value him particularly highly. For one thing, he is the same size as Garland – their definite point guard of the future – and it is very tough to start two 6’1″ players in an NBA backcourt.

The Cavs failed to reach an extension with Sexton prior to the season, and simply do not seem to be willing to invest significant money in him. Per reports, Sexton’s representatives asked for a 4-year, 100M deal. This seems like a very reasonable price considering his production through his first three years in the NBA, but the Cavs didn’t budge. Once you piece everything together, it is pretty easy to see why he might be available in a trade for the right price.

The Houston Rockets are in a unique position to acquire someone like Collin Sexton in a trade. They are one of the very few teams in the NBA whose objective for the season is not to win as many games as possible; Sexton’s injury, then, shouldn’t really bother them.

Most importantly for the sake of this trade, the Rockets currently roster the type of player a winning team with questionable guard depth (ahem, Cavs) should be looking for: Eric Gordon. With Gordon as a centerpiece, the Rockets have one of the better potential trade packages across the league.

So let’s get into the details, shall we?

Any trade which includes Collin Sexton coming to the Rockets and Gordon to the Cavs needs some other moving pieces as well. Ricky Rubio would likely be coming down to Houston, and a veteran Rockets players would likely head up north to match salaries.

Here are 2 fake trades which I think would make sense for either team:

For the Rockets, the thinking is that they do not need Eric Gordon and David Nwaba as aging vets on a rebuilding team. And the first round pick will likely be a late first in either case above.

In return, they get Collin Sexton, a high level talent who has already proven his worth as a very good NBA player in a bad situation. Not to mention the bird rights for Ricky Rubio, a veteran point guard who could bring a lot of stability on the court and put the young core in better spots to succeed.

The Cavs, currently 1.5 games out of the 1st seed in the Eastern Conference, are trading two players who won’t return this season for one starting caliber playoff-proven guard and one decent back-end rotation guy. They would also be getting a first round pick, either for this year or for the highly touted 2023 draft. They get better in the short term while also adding another draft pick, and lose no on-court production for this season.

I have already discussed what a potential trade would look like, but let’s take a deeper look into the why.

Sexton is on the final year of his rookie deal, so the purpose of trading for him would be to acquire his restricted free agency rights. Therefore, before trading for him, the Rockets must ask themselves if they are willing to pay significant money to Sexton in free agency, and match most, if not all, offers.

Sexton seems to have a pretty poor reputation around the league currently. Or, at least, that’s the only reason I can think of to explain why the Cavs didn’t sign him to a 4 year, 100M deal in the off-season. He has exceeded all reasonable on-court expectations for a guy who was picked 8th in the draft, and that contract extension would have been completely reasonable. Now, though, with the injury, his value may have fallen further. Eric Pincus of Bleacher Report speculated that the offers in free agency may drop to 15M dollars annually. This seems like a complete steal for a 23-year-old who has played as well as he has in the NBA.

But signing Sexton isn’t just about value and money. It’s about commitment. Sexton is certainly young enough to fit the timeline, but one thing that must be considered heavily before deciding on a potential trade is how Sexton fits with the current, existing core. And, looking ahead, how will he fit in with some of the top prospects of the 2022 NBA draft who the Rockets will be targeting?

Committing to Sexton would mean officially giving up on the Kevin Porter Jr. at point guard experiment, at least as a starter. There have been ups and downs, but KPJ has definitely acquired valuable skills that he can use at any position in the future.

Most importantly, the Rockets must examine the backcourt fit between Sexton and Jalen Green to see if this partnership can work long term. Neither are natural passers, and Sexton’s size would cause some defensive limitations. However, I would argue that the Rockets are actually in need of a guy like Sexton on the defensive side – someone who can stick with opposing point guards and move KPJ to the wing, where the latter’s defensive strengths really shine.

On the offensive side, opposing coaches will struggle designing a game plan to stop the electric backcourt. As for Green, he will have the opportunity to learn from Sexton’s always-ferocious-mentality. And to make up for Sexton’s passing limitations, the hope is for Alperen Şengün to eventually take on a starter spot. This will allow Şengün to be used as an “offensive hub” of sorts, and there won’t be as big a need for a “pure” point guard. The Rockets can implement more of a “skilled” point guard instead, and Sexton certainly fits the bill.

At the end of the day, Collin Sexton is just 23 years old. He has proven himself to be an extremely talented hard worker, and is already an *elite* scorer at the NBA level, despite some terrible team context. The biggest knock on him is his playmaking, but he makes up for it in other ways:

When you can consistently do something like this, in addition to being able to score from every spot on the floor, the rest will figure itself out.

Let’s say I have convinced you that the Houston Rockets should target Collin Sexton. But why should the Rockets trade assets for him now, when he’ll be a free agent in a couple of months anyway?

The answer is that restricted free agency is very complicated. It gets even more complicated when you won’t have a significant amount of cap space…like the Houston Rockets.

In simplest terms, the Rockets will not be able to sign him outright in free agency; instead, they would need to agree to a sign and trade deal with the Cavs. This may sound like a good idea, but it gets tricky quickly. Whether or not the Rockets trade for Sexton now, Eric Gordon will likely not be a Rocket by the time free agency arrives. It wouldn’t be the Cavs in this scenario, but it would be another contending team looking to upgrade their roster for a playoff run. Therefore, in the hypothetical sign and trade, the Rockets would no longer be able to offer Gordon as a trade chip.

Without Gordon, it would become quite difficult to match salaries. Further, the Cavs probably wouldn’t be interested anymore and could find better offers elsewhere. If the Rockets want Sexton – and feel that they can get him with Gordon as a centerpiece – they need to make that trade now, before it’s too late.

Due to the picks they owe to the Thunder, it is in the Rockets’ best interest to be back in playoff contention as early as the 2023-2024 season. What better way to accomplish that goal than to have your talented young core do it for you? (see: Grizzlies, Memphis),

Players as good and young as Collin Sexton are almost never available. Due to rare circumstances, Sexton is.

The Rockets need to pounce.