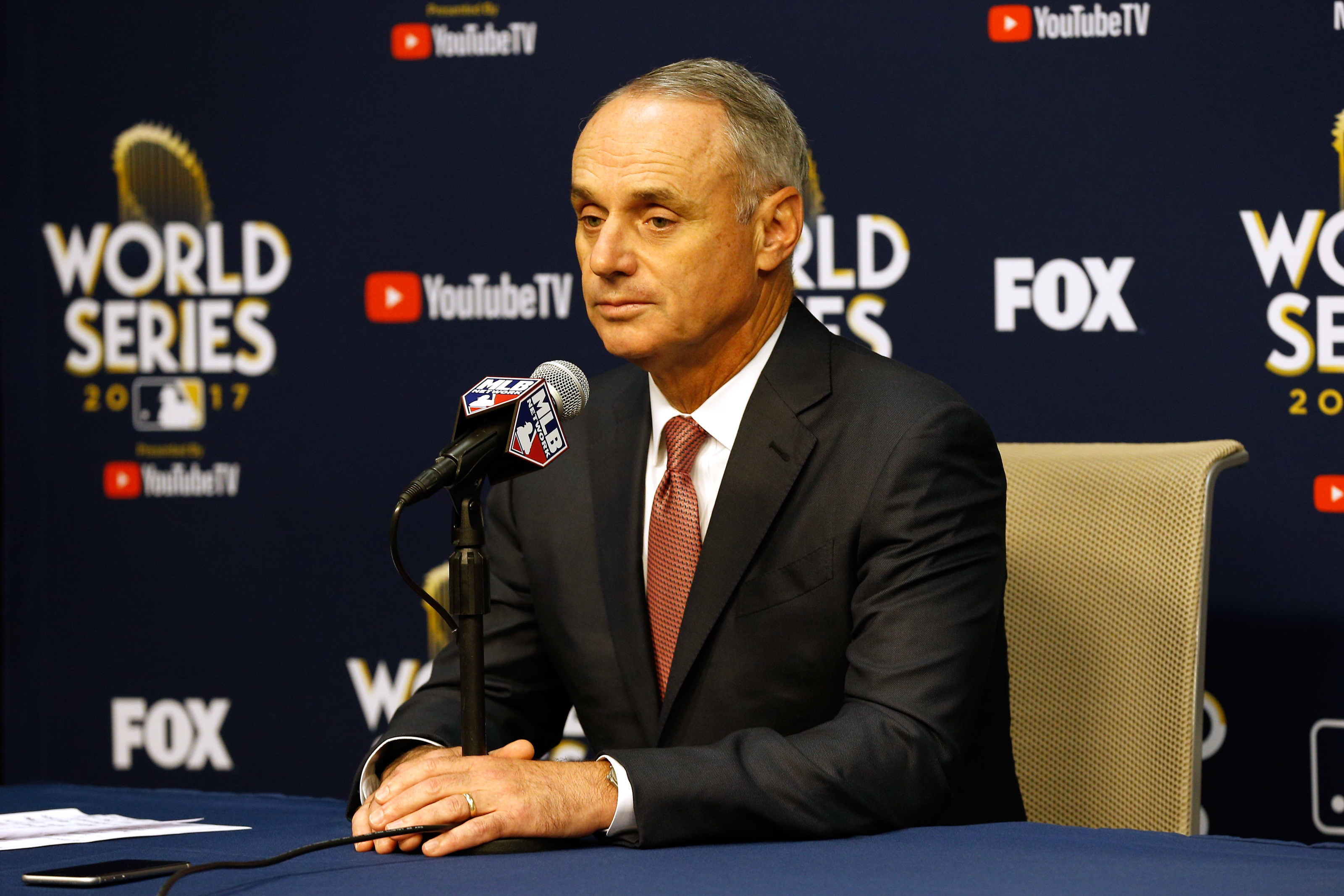 HOUSTON, TX - OCTOBER 28: Major League Baseball Commissioner Robert D. Manfred Jr. speaks to the media during a press conference prior to game four of the 2017 World Series between the Houston Astros and the Los Angeles Dodgers at Minute Maid Park on October 28, 2017 in Houston, Texas. (Photo by Bob Levey/Getty Images)

After months of legal battles, the Yankees and Major League Baseball were unsuccessful in preventing the release of the “Yankees Letter,” in which Commissioner Rob Manfred detailed the findings of the league’s investigation into the Yankees’ purported sign stealing in 2015-2016. Despite all the hoopla, the letter didn’t reveal much that we didn’t already know. But it did confirm some things that Astros fans have been saying for a while.

The letter confirms that the Yankees were using video equipment, which was supposed to be used to decide whether to challenge a play on the field, to decode opposing teams’ sign sequences. That information was then relayed to a runner on second base, who would use that information to determine what pitch was coming and signal to the batter at the plate.

The 2017-18 Astros, as the league previously found, used a live video feed to read a catcher’s signs, and then banged on a trash can in the dugout to signal to the hitter whether the incoming pitch was a fastball or an offspeed pitch. So the main difference between the two is that the Astros streamlined the process by cutting out the middleman (i.e. the runner on second), decoding signs in real time and signaling directly to the batter.

One might not think this is a huge difference, but to many in the media, it apparently makes all the difference in the world. ESPN’s Jeff Passan, for one, made it clear that while the Yankees (and Red Sox) did cheat, it was far less egregious than what the Astros did. We’re told that what the Yankees did was happening all around the game, and therefore isn’t a big deal, but what the Astros did was supposedly worse than anything the sport has ever seen.

This is a load of garbage. Sign stealing in and of itself is not illegal and has never been illegal. If a runner is able to decode a catcher’s signs, or deduce that a pitcher is tipping his pitches, he can signal that information to the batter. It’s the use of electronic equipment to aid in those efforts that the league has deemed improper, and that rule was on the books well before the Astros began their scheme.

Both the Yankees and Red Sox used electronic equipment (i.e. their video rooms) to steal signs. Yet, as The Athletic’s Evan Drellich writes, “this behavior unto itself, Manfred decided, was not illegal.” What did he decide was illegal, you ask? “What Manfred instead decided was that it would be a violation if the information learned in those rooms was subsequently communicated via electronics.” This is what got the Yankees (using the dugout phone) and Red Sox (using an Apple Watch) a slap on the wrist.

But the Astros? I’m not sure a trash can qualifies as electronic equipment. The monitor the team used to decode signs “was placed on a wall steps from the team’s home dugout,” so it doesn’t sound like any electronic equipment was used to relay the information to the dugout. The person at the monitor could simply say “fastball” loud enough for it to be heard by whoever’s doing the signaling.

Is it really that much worse?

The main difference here is that the Yankees and Red Sox were supposedly not decoding signs in their video rooms in real time. They used video from plays that had already happened to figure out the catcher’s sequence, then gave that information to the baserunner so he could decode the signs and signal the batter. This was video they were allowed to have — they just used it in a way the league hadn’t intended but should have anticipated.

The Astros took it a step farther and set up a live video feed for the purpose of decoding signs in real time and signaling the hitter before the pitch was thrown. It is a material difference, but it’s not as much of a difference as we’re led to believe. It’s still using electronic equipment for the purpose of stealing signs. If two guys cheated on their wives, it doesn’t make it entirely different if one guy used protection and one didn’t. The rule is broken regardless.

Some also point to the fact that the Astros continued their sign stealing even after Manfred’s September 2017 memo to teams, but that should be irrelevant. Manfred’s memo basically reminded teams of the rules and warned that the league would be enforcing them. The rules were in place long before that. If Barry Bonds and Roger Clemens are being kept out of the Hall of Fame even though their steroid use came before MLB started enforcing its ban on steroids, then whether the cheating occurred before or after the memo shouldn’t matter.

What this all boils down to is Manfred trying to avoid a scandal. He knew the Yankees and Red Sox had broken the rules and used video to decode signs but decided to say it was okay as long as they didn’t use electronic equipment to relay that information. That way he didn’t have to punish the Yankees and Red Sox for sign stealing, nor did he have to crack down on the rest of the league which was surely doing the same thing. He could cover it up, protect the big market teams, and not let the world know what was happening.

It might have worked if Mike Fiers hadn’t blown it all up by going on the record to detail the Astros’ scheme. At that point Manfred had no choice but to punish the Astros, and given the fan outrage, he had to do it very publicly. If making an example of the Astros meant he could gloss over everything else that was being done by other teams, then he was more than willing to do it.

But this whole thing is a farce to begin with. Based on where Manfred decided to draw the line, if a team was using its replay video to decode sign sequences, and then relaying that information to baserunners through non-electronic means, it would be perfectly acceptable. That’s a silly and very arbitrary hill to die on, and I think any disinterested observer would agree.

Not as different as they say

Again, I know the Astros took it a step farther by using a live video feed. But the use of the trash can itself was not illegal since it wasn’t electronic, yet that’s what the haters harp on the most. If the Astros used buzzers or some other kind of wearable device, it would be understandable, but that has been thoroughly debunked.

Basically the Astros had a more sophisticated way of stealing signs and a very crude way of signaling to hitters. The Yankees and Red Sox used a common method of decoding sign sequences (which Manfred decided to allow) but used electronics in some manner to relay that information. Anyone who acts like the Astros’ scheme was so much worse is just buying into what the league wants them to believe.

The fact that what the Yankees and Red Sox were doing was prevalent across the league does not exonerate them. In spite of Manfred moving the goalposts, they still broke the rules. They still cheated. But it’s been framed as if it was much ado about nothing, and while the Astros did take it a step farther, we’re told they singlehandedly ruined the game by doing so. Sorry, Rob, but I’m not buying that narrative.

Read the Letter in Full Here