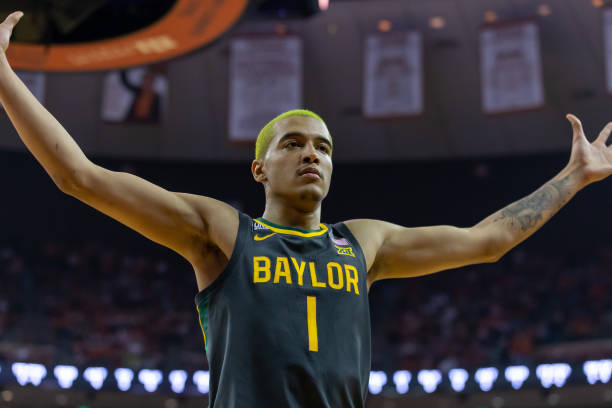 AUSTIN, TX - FEBRUARY 28: Baylor Bears forward Jeremy Sochan (1) defends an inbounds play during the first half of the game between Texas Longhorns and Baylor Bears on February 28, 2022, at Frank Erwin Center in Austin, TX. (Photo by David Buono/Icon Sportswire via Getty Images)

Most of the discussion surrounding the NBA draft focuses on the top picks, and even more so in the Houston Rockets’ case, as Houston secured the worst record in the NBA and received the 3rd pick in the 2022 NBA draft.

Aside from that, though, the Rockets also have the 17th pick in the draft which they acquired from the Brooklyn in the James Harden deal, so let’s shed some light on the prospects that should be available around that range.

Every draft cycle, there are prospects who are considered as sure-fire first round picks before even playing for a minute in the final pre-draft season, and there are others, who haven’t been on scouts’ radars for very long and have to play themselves into these discussions. Jeremy Sochan is part of the 2nd group, and his jump to lottery discussions has been sudden and eye-opening.

The 6’9″ 18-year-old is the type of player whose impact goes beyond raw stats, and Sochan has flashed the skillset of a multi-year, elite role player, the type contending teams are always out to get.

Jeremy Sochan is the best defensive wing in the class, excelling in multiple defensive roles and coverages, and just being in the right spot at seemingly all times. Seeing how the ability to guard multiple positions Is so important in the modern NBA, I’d like to first point out his terrific iso defense in the perimeter, being able to move his feet well, dictate movement, cut off angles, and contest jumpers with his 7 foot wingspan:

Despite his lack of strength and overall inexperience, Sochan *battles*, and has shown high-end flashes and impressive consistency, even when playing the 5, that make me believe he’ll make an all-defensive team at some point in his career. His effort and ability to recover and reposition himself to pressure the ball handler is just unreal. Sometimes, it’s better to simply show the film, so enjoy this breakdown of Sochan’s defense:

Moving on to the offensive end, this is where things aren’t as promising. I hate to start out negatively, but given that Sochan isn’t a monster athlete, overly strong, an elite finisher or has a low-post skillset, he’s unlikely to become a real pick and roll threat, and must be a respectable shooter to succeed. unfortunately, the early returns aren’t very encouraging.

Sochan’s jumpshot *looks* good, and he did shoot 40% from the mid range area over the past season, which is encouraging, yet he only made 29.7% of his threes (2.7 3PA) and 58.9% of his free throws (3 FTA) over 30 games. Until the shooting comes through, good defensive teams will make it hard for him to stay on the court for major stretches. It is nice, however, to see him flash some tough shot making at times:

Once you dig past the shooting that is needed in order to unlock the rest of his offensive game, Sochan actually has an intriguing offensive skillset, as he already possesses the skills needed to become an elite closeout attacker and overall connector.

I’d like to start with his passing, a surprisingly fun aspect of his game. Sochan only averaged 1.8 assists per game, but he has a good feel for the game, and is able to showcase it with live-dribble passes and quick decisions you don’t often see from prospects with his tools and age. Whether it’s a fine dish to the big, drive and kick or in transition, Jeremy Sochan can pass:

Sochan is fluid for his size, and is surprisingly quick, which helps him as a driver. He’s very good using his length to finish with both hands, showed sweet touch around the rim , finishing in a variety of angles, and is just always composed around the basket. Jeremy shot an astounding 75% at the rim over this past season, and if the shooting comes along, he has the potential to be a mismatch on the offensive end- too fast for slow footed bigs, too tall and lengthy for smaller guards:

As you probably noticed from the video compilations, Sochan is a good ball handler for his size, who actually took the ball up the court a couple of times for Baylor off made baskets. While I don’t project him to be any type of creator in the NBA, as he lacks a pull up jumper, explosiveness and ability to create separation, , it comes in handy when your power forward is a capable ball handler:

In addition to what he can do with the ball in his hands, Jeremy Sochan is a little-thing-king. Here’s an example- how many lanky 6’9″ wings are actually willing to set screens like *that*:

He has a good knack for slipping screens, whether it’s to the paint or even to behind the 3 point line, as shown below:

And as a true man of Polish descent, he even attempted the Gortat seal in his final game of the season:

Sochan is far from perfect. However,  it typically feels like his struggles have more to do with his youth and inexperience rather than anything else. Watching him, it is clear the guy just knows how to play, and ironing out some little things will lead to noticeable improvements on both ends of the floor.

Jeremy Sochan doesn’t have an exciting offensive game, and I highly doubt he will ever be a significant contributor on that end. With that being said, while other wing-sized prospects may struggle at times adjusting to their NBA roles, Sochan is patiently awaiting the chance to fill the gaps on a winning team. His skillset is easily projectable, and it’s easy to see the team drafting Sochan reaping the benefits for years to come with him playing him in the valued Mikal Bridges role.

Before wrapping up, I’d like to emphasize again how essential an improved 3 point shot is for Jeremy Sochan’s offensive game. Selecting him in the lottery will require taking a leap of faith with the jumper, and it’s entirely possible the lack of shooting holds him back from ever being a starting caliber player. And yet, drafting him ahead of some bigger names could end up as a worthy bet, as prospects with his combination of youth, defensive versatility, height, length and feel don’t come often.