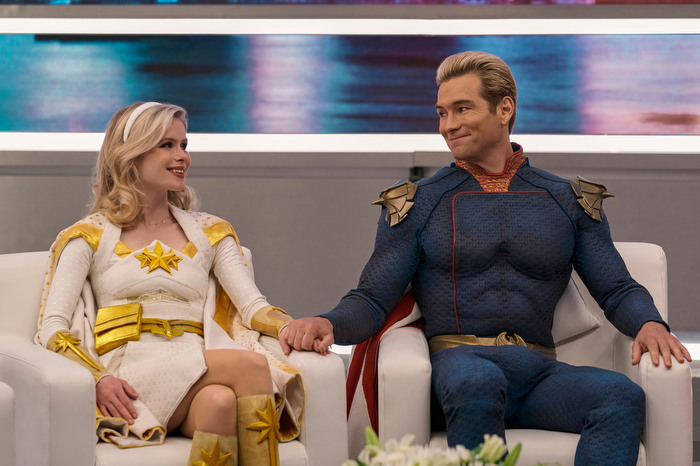 This year’s Emmy nominations just came out the other day. And as exciting as it is to see our favorite shows, actors, directors, etc. get some recognition by the TV Academy, it was also an important reminder that there’s a shit ton of TV out here. There were more than 30 individual shows that got 5+ Emmy nominations this year. Not to mention countless others, like my beloved Outer Range, that didn’t get nominated at all. There are like 75 different streaming services fighting for our attention and our monthly fees plus about 717 cable channels. All that to say, I can’t watch every TV show that people tell me is good.

It’s nothing personal (for most of you, the rest of you know who you are and what you did)! I love to hear recommendations from my friends. It brings me great joy to see people excitedly engaging in #discourse about #popculture! And, for the most part, I fully believe you when you tell me that TV shows are fantastic or that I would enjoy them! But as great as I’m sure Barry, The Boys, Invincible, and Better Call Saul all are, I just know I’m not going to watch them.

To be clear, this isn’t to pick on those shows specifically, parts of this list applies to a long back catalog of great works on the silver screen! Also, this isn’t me saying that I’m cool or interesting because I don’t watch popular TV shows. I’m not cool or interesting and I love a lot of the popular TV shows that I do watch. This is mostly a response to the “oh but Dex, you just HAVE to watch *insert show*! It’s so good!” conversations I find myself in almost daily. I will never “need” to watch a television show, and even if somehow I did need to watch it, being good would not be the reason why. This is also a desperate cry for help and a fun distraction from the real writing I need to do for my day job.

Anyway, it’s time for me to come clean and be honest. Here are 21 possible reasons that might explain why I’m not going to watch that show you like.

A long time ago somebody decided that in order to eat and have a place to live we have to do “work” and make “money”. It’s a really dumb system and I’m trying to get in touch with the manager to request a change. But for now, the whole thing greatly eats into my TV watching time and your favorite show didn’t make the cut. Sorry.

I simply don’t have the attention span or the free time to watch 11 seasons of a show with 14 1-hour long episodes in each season. As previously mentioned, I have a job and also I am just not at the point in my ADHD journey where I can sit through that much content at my own pace.

If you tell me a show is good and then when I ask how many seasons there are you tell me something like “well there’s 9 seasons total. The 1st 2 are great and then it’s just okay until season 9 when it gets REALLY GOOD!” I’m not signing up for that, fam.

4. I already know how it ends so I don’t want to get invested.

Y’all have been talking to me about the final scene of The Sopranos for 15 years bro I’m not going to watch 7 seasons of it fully knowing that it ends like that. I’m just not!

5. Every other person who likes this show sucks.

If the only people I ever see on the timeline discussing the merits of a tv show are you, Ben Shapiro, and the Barstool guys then I’m sorry, I’m not joining the kla-I mean fanbase.

6. You’re the only person who likes this show.

If the only person I ever see on the timeline discussing the merits of a TV show is you then I’m sorry, I’m not joining the fan.

Some of you have recommended shows that I know, in fact, are #not #good and so now you’re out of the circle of TV trust. I still love you though!

If I’m just completely unmoved every time you post a clip or a new trailer that you’re really excited about or you retweet some 94-tweet thread about the brilliant character arc of the leads I’m not watching that show, dawg. Happy for you though!

I really wanted to like The Office! Y’all seem like y’all are having so much fun. Nobody likes to be the guy at the dinner table who doesn’t understand the Office references! I gave it my best shot but the show just isn’t for me, man.

I will not elaborate.

I’m too lazy to pirate but I’m also too poor to have every streaming service. Sorry, Showtime and Starz, but you’re not getting a dime out of me. Peacock, you were able to live too good off me for too long with nothing to show for it so you’re outta here! Shudder will never be allowed in my home. We are people of God!

12. There’s too many other shows I need to watch.

As previously mentioned, there’s a shit ton of TV out here, dawg. My list on all the streaming services I do have is outrageously long. I’m not going to lie to you and pretend that your fave TV show is going to get to skip the line.

13. Every week I see you crying about the death of your favorite characters.

I don’t know if I’ll ever be in the mood to catch up on 11 seasons of unrelenting negativity and pain. I saw grown men cry about the death of ole boy who got his brains beat in with the baseball bat on The Walking Dead. I’m not signing up to come late to that party!

15. It was my ex-girlfriend’s favorite show.

Honestly, this is very similar to reason #5 but the key distinction here is that this problem can be resolved by me going to therapy or developing healthy ways to deal with heartache. But I’m not going to do that and I’m also not going to watch this show.

16. I like movies and sports better so I’m busy watching those instead.

Watching a Rockets game or going to the movie theater is much more fun for me than sitting on my couch at home and watching 97 hours of television. Plus I write movie reviews and talk about sports for this website so I think it’s important to keep doing those things.

I’m just never going to watch how House of Cards ends now and I’m okay with that.

I don’t want to be a part of the proletariat revolution right now I just want to enjoy my free time. This has never been a problem that actually kept me from watching a show I’m just filibustering now until I can get to reason #21, which is the most important.

20. My best friend was killed in a tragic accident caused by a viral dance challenge based on that show.

Chill on me, fam! I don’t want to, I don’t need to, and you not gon whoop my ass so I’m not going to watch that damn show you like! Stop telling me I just neeeeeeed to see it. No, I don’t! I’m so happy that you love the show and I might even love it too if I watched it but I will simply not be doing that!

You can follow Apollo Media’s brand new official Movies/Pop Culture account @WatchWithApollo where I promise people who watch way more TV shows than I do also tweet things! You can follow the podcast One Take Pod as well @1TakePod. Listen now wherever you get your podcasts. Our latest episode is about Thor: Love and Thunder. Check it out & subscribe.