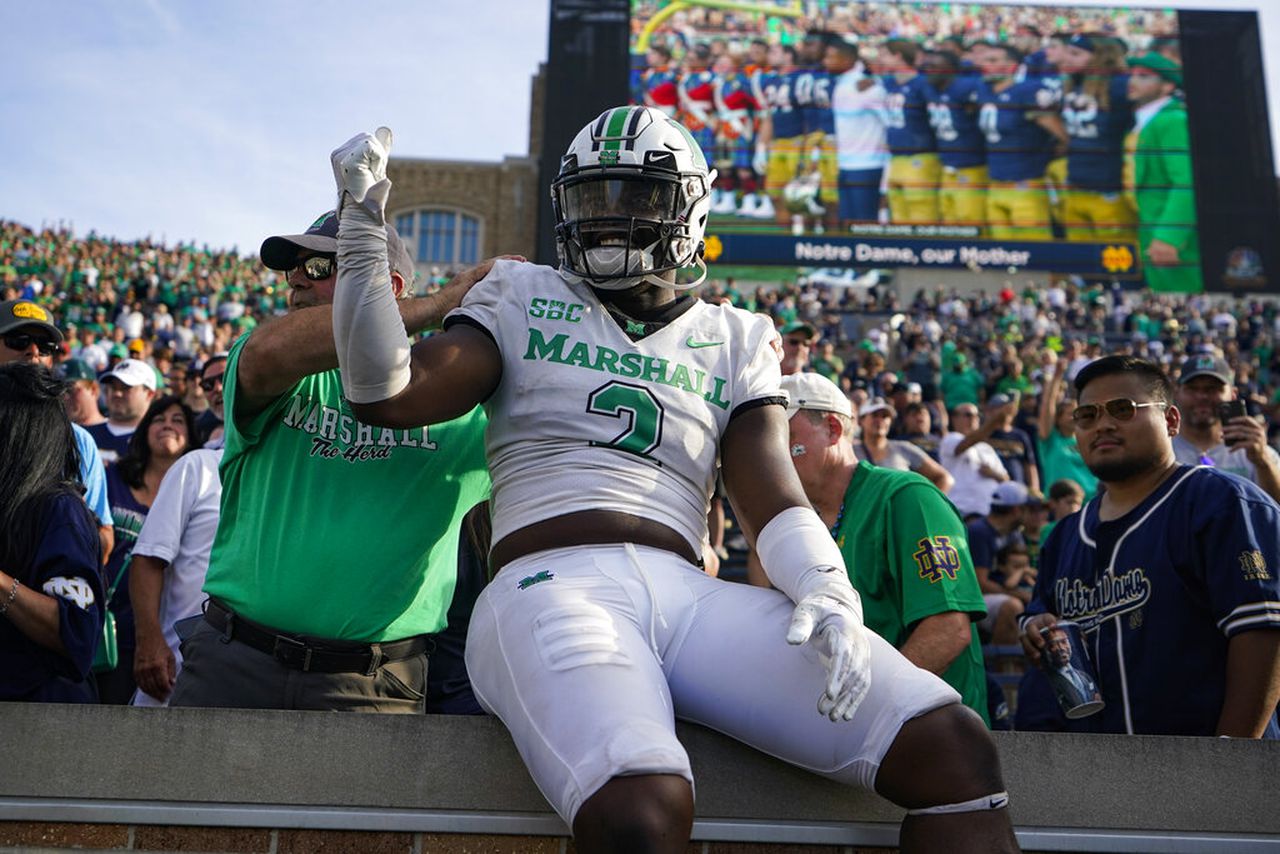 We need to start talking about the Sunbelt possibly being better than the American. Three major upsets took place this weekend. App State upsets Texas A&M in College station. The Aggie’s defense slowed down the Mountaineer offensive attack, but to the surprise of many Jimbo Fisher’s offense only accounted for 186 total yards. Sunbelt newcomer Marshall beats Notre Dame in South Bend and for a nightcap, Georgia Southern defeated Nebraska in a shootout. Clay Helton’s Eagles went into Lincoln against a desperate squad and put the final straw on Nebraska’s back to fire Scott Frost. The conference that was looked at as a joke in the mid 2000s and turned into a force in College Football.

It’s week two and the Kansas Jayhawks have equaled their win total from last year. Lance Leipold deserves a tremendous amount of credit. This is not the Jayhawks of old. The offense looks totally improved and the Jayhawks are going to be a lot more competitive than they were in recent years. With that being said, it will still be quite difficult for Kansas to make a bowl but it looks like they are going in the right direction.

Hear me out. Scott Frost deserves to be fired, but this man is going to be bought out for 15 million dollars. If the university waited until October 2nd the buyout would’ve been 7.5 million less. Nebraska elected to fire him late Sunday morning, and now Scott Frost is free. He doesn’t have the stress of coaching at Nebraska, and can sit on his couch collecting checks.

Scott Frost has been fired and will be given a Scrooge McDuck amount of money. Even though Frost is gone the Cornhusker football program remains on fire. This was the team that was supposed to turn the corner, but it looks even worse than last year. The “Blackshirt” defense was the one thing you could count on as a Husker fan, but now they are more undisciplined than before. Usually, I love betting on teams the game after a firing of a coach, but I don’t even think that would give this locker room a boost against Oklahoma.

Jimbo Fisher’s offense only accounted for 186 total yards against a team that gave up 567 and  63 points the week before. The Aggie offense needs to figure something out. Is it Haynes King? Is it play calling? Does Jimbo need to hire an offensive coordinator?  Whatever it is, it’s holding this team back.

Speaking of an offense holding a team back, Iowa’s offense is some of the worst I’ve ever seen in College Football. Rumor is that Hawkeye’s public enemy number one, Brian Ferentz , wants to change within the offensive system. Kirk Ferentz (head coach and father of Brian) refuses to make those changes. Ferentz has always been consistent. Iowa has an identity of being a tough 8/9-win program (give or take) that has a knack for upsetting top ranked teams. Their defense is truly elite, but the offense is destroying this team. It may also lead to the departure of Kirk Ferentz’s tenure in Iowa City.

Notre Dame has a solid defense, and their offense struggled against Ohio State, which is understandable. However, throwing three picks and only scoring 21 points isn’t really acceptable against Marshall. I like Marcus Freeman, and I think he can have success, but this is not the way you want to start.

This one pains me to write. Neal Brown inherited a bit of a mess at West Virginia. Before Dana Holgorsen left for Houston, WVU fans were disappointed going 8-5 after having a veteran-heavy team. Then enters Neal Brown. There was a culture problem within the program, and Brown helped repair the teams image around Morgantown. However, that doesn’t lead to winning on the field, and sometimes doing things “the right way” takes the on-field product longer to come together. This is Neal Brown’s fourth year, and the defense looks lost at times. Ironically the Mountaineer’s strength this season ,the offense, was the issue the previous three years, particularly at quarterback. Fans looked at this year as “make or break” for Brown and he is currently 0-2 with a loss to arch-rival Pitt and Big 12 doormat Kansas. WVU and Neal Brown are likely heading for a divorce. Both sides wish it was different, but whoever is the next head coach in Morgantown has Neal Brown to thank for changing the culture for the better.