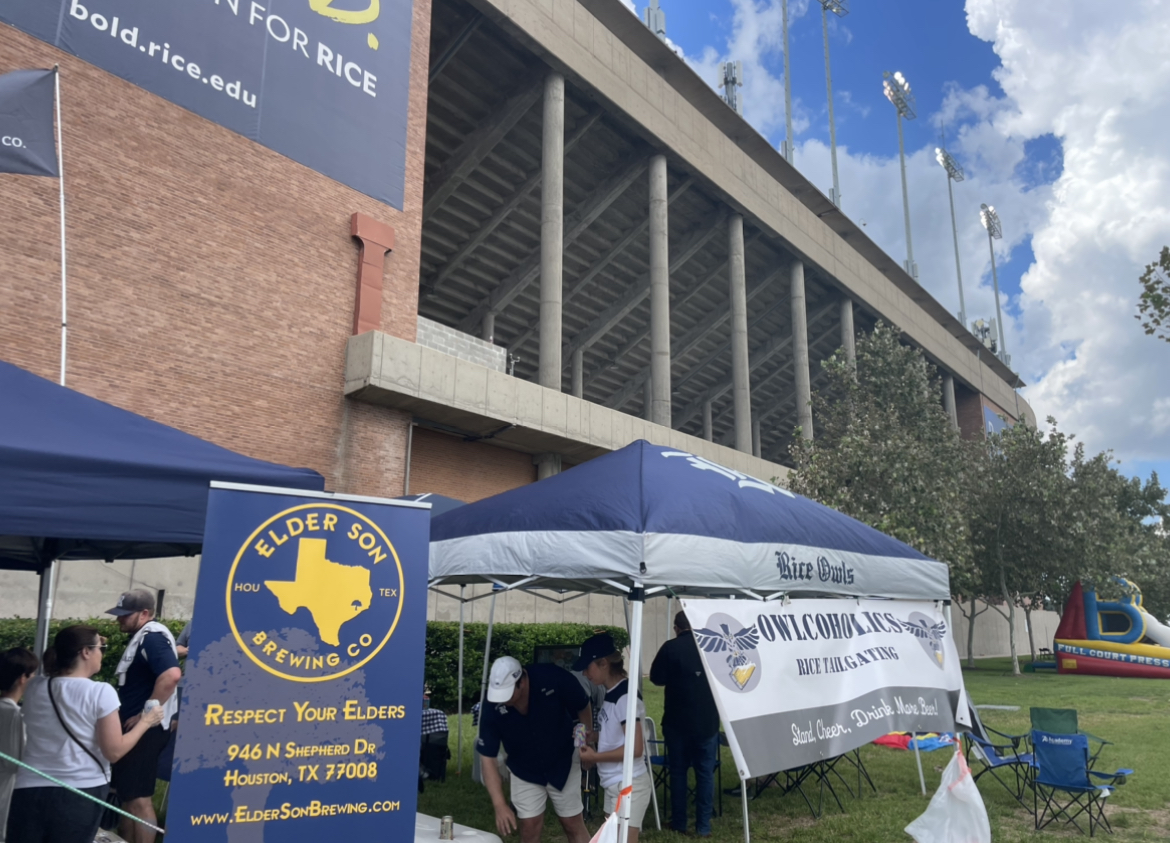 College football will forever have a special place in my heart. It is a world of contradictions. Incredible moments abound in this cornucopia of chaotic sports happenings. I was lucky enough to be a small participant in this world when I attended Texas A&M and got to play in front of 100k+ at Kyle Field. Now my favorite part of the college football paegentry isn’t the on-field competition – it is the gatherings outside of the stadium. The Holy Grail of pregames. The tailgate.

The tailgate is a sacred practice. No college football experience is complete without a tailgate and in my pursuit of college football memories, I decided it would be fun to begin a tour of tailgates in the college football world. The journey began this past Saturday here in my home of Houston when I headed to Rice Stadium to see the Owls take on the University of Louisiana Ragin’ Cajuns.

First off, I must give a huge thank you to my hosts for this first stop on the tailgate tour. DirtyBird Tailgaters and Owlcoholics welcomed me with open arms. Houston is obviously more large city than college town, so it was a bit surreal walking up to the tailgate in a major city but it was undoubtedly a college football tailgate complete with all the hospitality you’d expect. Local beer and spirits flowed freely and good times were had by all. Not to mention the delicious jambalaya that was served up in honor of the team making the trek west to Houston from Lafayette. TV’s were set up to watch the early games – a major key for any college football tailgate set up – and beer pong games kept the atmosphere lively. Now, I’m not personally much for pong but I did enthusiastically participate in “Thunderstruck”.

If you are unfamiliar with “Thunderstruck”, I worry you may not have ever been to a tailgate before. Named after and taking advantage of the song by AC/DC, “Thunderstruck” is the simplest of drinking games. Simply form a circle, let one person start the drinking, then after the word thunder is uttered – the next person up begins drinking. The drinking makes it’s way around the circle as you pray to not be stuck with one of the long gaps between thunders. I was lucky enough to not be stuck with the solo this time.

Once we finished Thunderstruck, it was about time to head inside the stadium. Now, obviously from the picture above, you can tell that the place wasn’t packed. However, I had a blast watching this contest. Rice was a +11 dog heading into this game. You wouldn’t have known that from the way their defense played. The Owls were able to pull off the upset and look good doing it despite having a few turnovers. I don’t want to harp too much on the game considering this is more about the tailgate (and the fact that I may not be able to get tickets to all the games I tailgate) but I have to give major points to Rice Stadium for one thing. The fact that you are able to leave the stadium at halftime and return is fantastic. Essentially, this led to a little mini-tailgate between the first and second half where I did cave to peer pressure and perform a shoey. I have a feeling this is going to end up being a bit of a calling card for these blogs.

All in all, my first tailgate of the Tailgate Chronicles was one heck of a party. A huge thank you to Kramer and the DirtyBird Tailgaters crew for inviting me out and kicking off this tour with a bang. If you are in Houston and looking for something to do on the weekend, check for a Rice home game. I had an absolute blast tailgating outside of Rice Stadium and will be back in the future to do it again.

I won’t be at a tailgate this upcoming weekend so stay tuned for the next edition of the Tailgate Chronicles after I head to West Virginia at Texas on October 1st.