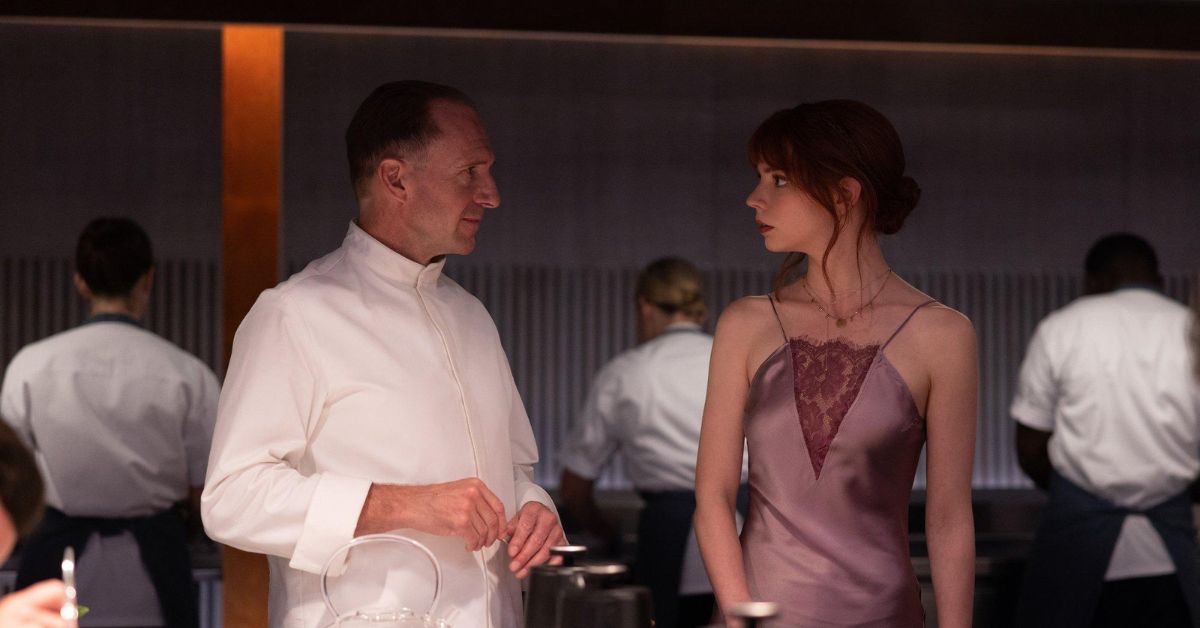 The Menu is the kind of film that feels strange to write a review about. Not because it’s particularly difficult to do so, the movie is a pretty straightforward and fun dark comedy with a couple of interesting surprises. But it’s hard to review a movie like The Menu because it pretty perfectly roasts criticism as a concept. And to sit here at my little desk with my little computer and type all my little nerdy shit about The Menu and what it means and whether or not it’s good or whatever feels kinda whack now that they already predicted the shit. It’s like that final rap battle scene in 8 Mile when Eminem told Falcon EVERYTHING the dude was about to say against him.

But screw it I ain’t no punk, I’ma get my shit off anyway. I only have a couple of nitpicks anyway. This movie was very fun overall. And before you ask, yes. I’m going to make bad food jokes in all my headings. I do what I want. It’s a movie called The Menu for crying out loud.

Let’s get into it.

A couple, Margot and Tyler, travel to a coastal island in the Pacific Northwest to eat at an exclusive restaurant, Hawthorn, where the reclusive, globally celebrated Chef Julian Slowik has prepared a lavish tasting menu for select special guests. The evening unfolds with increasing tension at each of the guest tables as secrets are revealed and unexpected courses are served. With wild and violent events occurring, Slowik’s motivation begins to rattle the diners as it becomes increasingly apparent that his elaborate menu is designed to catalyze to a shocking finale.

I can’t lie to y’all, I’ve seen the trailer for The Menu like 87 times at other movies I’ve been to this year. And every single time I texted my friends that this movie was going to be absolute ass. Because the trailer makes it look like The Menu is a mid-2000s TNT (they know drama) Sunday afternoon type STINKER. But the movie is surprisingly dope.

I knew I had to check this movie out because it stars Anya Taylor-Joy, one of the best young actresses working today, and it dropped with a stunningly high 90% Critics score on Rotten Tomatoes. The Menu, directed by Mark Mylod, also stars Voldemort (Ralph Fiennes), Nicholas Hoult – “the ultimate ohhhhhhh yeeeeeeah I’ve seen that guy!” actor – and a host of others including Hong Chau, Janet McTeer, Judith Light, John Leguizamo, Rob Yang, and many more.

So, now that we’ve paid proper tribute to our SEO overlords, let’s get into the review.

The Menu Review: Cruelty and Spoiler-Free

This movie has a pretty snappy 1 hour and 46-minute runtime, wasting almost none of it. The setup is beautifully simple and you’re given basically all of the exposition you need exactly at the moment you need it. You see Anya Taylor-Joy (Margot) on the screen and you can immediately tell this fancy-ass restaurant is not her type of shit. Nicholas Hoult (Tyler) is right there beside her and you can tell he’s really really into this. Too into it. As you meet the rest of the guests at this restaurant, not even 5 minutes into the movie you’ve got everything you need to know about them. It’s a bunch of rich assholes getting on a boat to go to the artsy-fartsiest restaurant you can possibly imagine.

The Menu wastes no time introducing you to these people and making you hate almost all of them. We’ll come back to that very deliberate use of the word “almost” here in a sec. But the point is, The Menu features the kind of ruthlessly efficient storytelling that I love. I’m very envious of people who can do that. Telling you only exactly what you need to know and nothing else. No more, no less. Clearly, I myself am not blessed with the gift of brevity. ANYWAY.

Every type of rich person you despise is getting on this boat. The tech bros, the pretentious food critic and her dick-riding magazine editor, the washed-up actor who still thinks he’s a big deal, the old married couple who hates the poors, etc. And there’s also Anya Taylor-Joy, who is just like you. She’s incredible in her role, continuing to feel both human and hauntingly not of this world. Her unique beauty certainly helps create that feeling. But she’s also just damn good at this acting thing.

Lord Voldemort himself is quite easily the best part of The Menu. Playing the famous head chef of this weirdo restaurant, Fiennes dominates the screen with the kind of creepy and ominous presence that reminds you of why he was chosen to haunt children in the Harry Potter movies for so long. The dude is terrifying even when he’s just standing there. At various points, he does a single clap to draw the attention of his cult-like kitchen staff and the dinner guests and it’s honestly one of the most unnerving things I’ve seen in the movie theater this year. He’s just that good in this role. The music and cinematography definitely help, both are phenomenal, but Ralph Fiennes shines as the star of The Menu.

It’s no surprise and definitely not a spoiler to say that weird shit is going down at the restaurant in The Menu and that some people die. But the build-up to that and the unnerving, edge-of-your-seat tension The Menu is able to create is incredible. The movie is never “scary” in a horror movie, jump scare kind of way. I wouldn’t call it a thriller either. It’s more “kinda messed up” in a fun and funny way than anything else. Even when nothing is imminent, you feel like something HAS to be happening because it’s so obvious to you as a viewer that this shit ain’t right. But you can’t really put a finger on exactly how things are connected or how they’re going to come back until fairly late in The Menu‘s brief runtime. You watch this film bookmarking little things in your mind like “oh! that’s going to be important!” and then you’re right, but usually not in the way you expected. Which is the best thing you can ask for out of a movie like this.

Remember how I said this movie makes you hate almost all the rich assholes on this boat? There are a couple of characters The Menu never really bothers to do enough to make you hate them. That ended up being a problem for me because feeling that apathy or even sympathy for a few of the characters here pokes some holes into the overall messaging and impact of The Menu. This movie, quite explicitly, has a lot of things to say about wealth, class, status, how we treat people in the service industry, etc. But it falls down a little bit on that front for me with just a little bit of laziness. There’s one line in particular (it’s a spoiler so I won’t repeat it here) that pretty openly confirms they got to a point when writing the script where they just decided to say “screw it, we don’t need to flesh this out no one really cares.”

Sending Back Dessert (The Ending Sucks)

Yeah. I can’t really go too much deeper into it than that since this is a spoiler-free review. But the way The Menu wraps up felt pretty nonsensical to me and really is my only knock on the film. 90% of this movie is dope as hell and then at the end, I was like “…that’s…that’s what we’re doing now?” Whatever, man. I guess.

The ending doesn’t diminish the rest of The Menu too much for me. The concept is brilliantly executed up until that point and I think if you were interested in this movie enough to read my review to this point, you’ll definitely enjoy the film overall.

Grade: A-
Recommendation: I would say go check it out in a theater with a date or a friend if that’s easy for you to do. Not quite in hire a babysitter territory. But if you don’t have any kids or your kids or old enough that you can ditch them for 2 hours, it’s the kind of movie where you’ll love having someone to talk to about it.

I will say though, this has the makings of a movie that like 17 people go see in the movie theaters and then it drops on HBO Max or Hulu or whatever in a couple months and everyone is like “YOOOOOO THIS NEW ANYA TAYLOR-JOY MOVIE IS CRAZY!!! HAVE Y’ALL HEARD ABOUT THE MENU???” That just happened with Barbarian recently. I tried to tell y’all Barbarian was the HEAT but y’all ain’t wanna listen smh. WELL LISTEN TO ME NOW!

The Menu is good.

In this article:movie reviews, movies, movies and tv, reviews