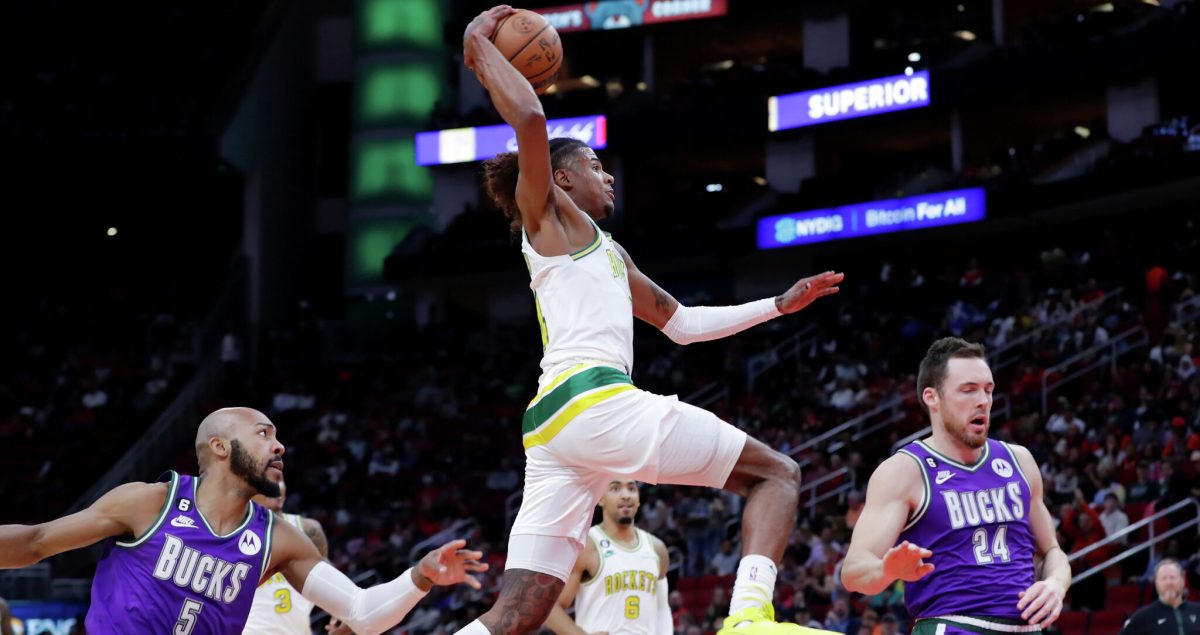 These are the kind of games that young teams remember as the season goes on. The Milwaukee Bucks, owners of the #2 seed in the Eastern Conference, the 2021 NBA Champs, and former MVP Giannis Antetokounpo, came to Toyota Center to play your Houston Rockets and LOST! The Houston Rockets had a grind it out win tonight, the type of win they needed after the blunder in San Antonio, and did it with an extra chip on their shoulder for their Coach Stephen Silas.

Unfortunate news came out today that the father of coach Silas, Paul Silas, had passed away at the of 79. Due to this unforeseen circumstance, John Lucas was named interim coach for the length of Coach Silas’s bereavement.

Jalen Green is officially your closer

“Bah God that’s Jalen Green’s music!” That’s what I heard when I was witnessing Jalen go “God Mode Level 4” in the 4th against these Bucks. It felt as though Jalen dug into his bag and he had every weapon at his disposal. Jalen scored 30 points and shot 12/21 from the field. He also shot 3/6 from 3 point land and had 7 rebounds with 3 assists as well. Jalen Green had moments where he just had complete control and no one could stop him as he consistently went downhill on Milwaukee bigs or decided to navigate through screens to lead to a jumper or 3. It felt as though Jalen would do whatever he could to ensure a Rockets victory tonight.

What more can we say about the effort Jabari had today against the Bucks? He may have had a lackluster scoring night but he filled up the box score in other ways. Jabari had 3 steals, 10 rebounds, 1 block, and team high +/- of +13! What’s the most impressive stat, that Jabari contributed to, was not his own numbers but Giannis’s statline. The man only scored 16 points and he averages 32 for the season! Jabari, as a rookie, held Giannis to half of his season average which is ABSOLUTELY incredible stuff. Watching this game showed the type of fire and passion that Jabari possesses and he showed so much discipline on that end as well. Jabari had an assignment tonight to apply the clamps on Giannis and he put this team, defensively, on his shoulders. This is will be a shining moment for Jabari when his rookie campaign comes to an end for sure.

The Rockets came out with an intensity and motivation that could not be matched by the Bucks tonight. The team put in a full 48 minute effort, on both ends of the floor, and we’re able to win one for Coach Silas. You could all see that the team wanted this victory so bad, in dedication to him, and it was simply beautiful. The beauty, that accompanies sport, is that it is the truest form of reality television. Despite who is favored, what it says on paper, every dog has its day and today was the day for the Houston Rockets. Bask in this victory everyone because Tuesday evening will be another tough game as Phoenix heads into town. They maybe looking for payback but if these Rockets come out firing, then anything can happen!