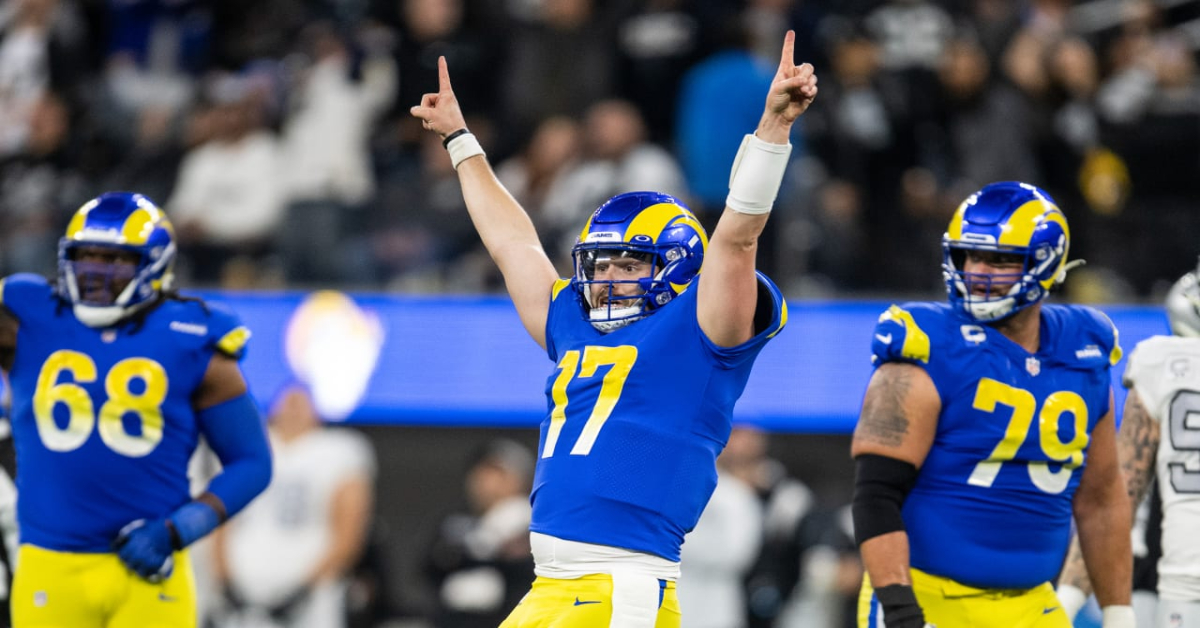 Coming off NFL Week 14, divisions are starting to be wrapped up. The draft order is taking shape. “In the hunt” lists are shortening. Winter break is approaching. Christmas shopping is ramping up. Fantasy football is breaking hearts and the importance of every snap can be felt.

It’s starting to get real.

The playoffs are coming.

1. One last shot for Baker Mayfield

Right around this time four years ago, Baker Mayfield was on the stage in New York collecting his Heisman trophy award. Months later he would be selected first overall by the Cleveland Browns in the 2018 NFL Draft. While many were skeptical of Baker’s actual talent and physical traits, not many people thought this is where we would be with the collegiate phenom just four years later.

Baker was released last week by the then 4-8 Carolina Panthers. In what was supposed to be a “prove it” year for Baker after an awful final season in Cleveland, Mayfield finds himself ranked dead last in EPA per play and CPOE, per rbsdm. It was a real possibility that Mayfield would go unclaimed after being released, but Sean McVay — a coach with truly nothing to lose at this point in the year — decided to give Baker another chance in 2022. And while the Rams have nothing left to play for but pride, the stakes for Baker couldn’t be much higher.

On Thursday night Mayfield and the Rams got the ball on their own 2 yard line, needing to go 98 yards in 1:45 with no timeouts left. A tall ask for the Tom Bradys and Patrick Mahomeses of the world. Baker, who had known the playbook for 36 hours and only knew his receivers by the names on the back of their jerseys? No shot.

After two penalties by Las Vegas and a few tough throws, Van Jefferson was dancing in the end zone, Mayfield was head-butting teammates on the sideline, and the Raiders’ season was over. It was about as unlikely of a comeback that you will see in the NFL and it was led by the worst QB, statistically, in the league.

For just a minute there the Mayfield magic was back.

Baker will now learn the playbook and start the final four games for the Rams. If he’s able to look functional — a tall task considering the state of the Rams’ offense — he’ll likely earn a backup QB job for the Rams or for someone else in 2023. If things go for Baker like they have been, acting in commercials will become more than a side hustle for the former Heisman winner.

2. Brandon Staley is fighting with his back against the wall

Fighting through some adversity is nothing new for Chargers head coach Brandon Staley. Staley lost his mother to cancer in 2004, beat cancer himself, and worked his way up from Division III football to become head coach of the Bolts. A flurry of injuries to his secondary and defensive front won’t cause this guy to throw in the towel on the opportunity of a lifetime.

The Chargers entered the year with Super Bowl expectations after an aggressive offseason. Things haven’t gone to plan and the Chargers are back in a familiar spot, fighting for their playoff lives throughout December. Very few people, including myself, gave Staley’s defense a chance to contain Miami’s explosive offense on Sunday night. There was no reason to think the Chargers’ defense wouldn’t get run off the field based on the matchup, stats, and tape. But sure enough, the game began and it didn’t take long to realize that Staley had cooked up a plan to give his unit a chance to compete. Down several key starters, the Chargers forced incomplete pass after incomplete pass, punt after punt after punt. The corners were jamming Tyreek Hill and Jaylen Waddle at the line of scrimmage while the linebackers and safeties clogged the middle of the field. The plan was to disrupt Tua’s timing and force him to make tough throws to the boundaries and over the top of the defense. Tua couldn’t make it happen and the Chargers picked up a monumental win, putting Staley’s team right back in the thick of the AFC playoff picture.

Staley has been heavily criticized in his short tenure with LA. He hasn’t won enough, his defense has been bad, and many people don’t like the way he manages games. Failing to make the playoffs for a second straight season with Justin Herbert on a rookie deal very well could get Staley fired. With his back against the wall, Staley’s game plan was perfect on Sunday and he got a bunch of backups and practice squad guys to buy in and execute. That is what got him hired and he produced when he absolutely needed it most.

Staley is a tough dude. He has been through it all and won’t back down from a challenge. I don’t know if the Chargers will make the playoffs or if Staley will be back in 2023. But the one thing that is certain, Staley is not going down without a fight.

Much like Baker Mayfield, Sam Darnold is perhaps getting his last shot to prove something to the league. Darnold was also a top pick in 2018 and has also had it quite rough as an NFL QB. The Panthers are 2-0 since making the swap from Mayfield to Darnold, and because of the futility of the NFC South, the 5-8 Panthers aren’t dead yet. 8 wins will likely be enough to win the division and Carolina has four winnable games left on the schedule. The Panthers aren’t any good, and certainly don’t pose any threat to real NFC contenders. But every once in a while there’s a division like this where anything goes. Sam Darnold, Desmond Ridder, and Andy Dalton are fighting to track down Tom Brady for a division crown. The hilarious part is that Brady’s offense looks just as bad as any of these other teams, making this wild scenario a real possibility.

Will Darnold lead the Panthers to a home playoff game? It feels more likely that this story ends with Darnold hurling crippling interceptions as Brady weasels his way into the tournament. Either way, it will be interesting to see what Darnold makes of this opportunity to show everyone that he still has something left to offer.

4. What now for the Dolphins?

A few weeks ago the Dolphins were the popular Super Bowl sleeper. The way the offense was clicking it seemed like a real possibility that Miami might just throw deep in-breakers all the way to Glendale. However, two of the best defensive minds in football — Demeco Ryans and Brandon Staley — have stopped this runaway train of an offense in its tracks and have exposed Tua’s weaknesses in the process.

Tua is money when everything around him is perfect. Give him a clean pocket and a window to make a throw over the middle of the field and he’ll make the play. The issue for the Dolphins’ offense has become what happens when Plan A is not working. Tua does not handle pressure well. When he starts to feel some heat he panics and his accuracy goes out the window. Tua also lacks the arm strength necessary to make tough throws to the sideline and consistently stretch a defense vertically.

For most of the year, Mike McDaniel has been calling all the right shots, putting Tua in a position to succeed. The calendar has flipped to December and defenses seem to have finally found a way to rattle Tua and slow down this offense. This is not to say that the Dolphins are done. If you play press coverage against Tyreek and Waddle for four quarters you are going to get burned. But will you get burned often enough and will Tua always be able to make the defense pay? He might not be able to. McDaniel and Tua have some real adjustments to make and will have to do so against good defenses.

Miami sits at 8-5 and is suddenly not a lock to make the playoffs. The Dolphin’s remaining schedule is as follows: @ Bills, vs Packers, @ Patriots, vs Jets. 2-2 should get the job done, but 1-3 seems possible with how Tua looks at the moment. Tua and McDaniel got a lot of praise — rightfully so — throughout this year, now it’s time to back it up.

There is no better team to face than the Vikings right now. That secondary is bleeding fantasy points.

Pierre Strong is a great option if Rhamondre can’t go against the Raiders.

Turns out D’Andre Swift is not back to his normal snap share after all.

How many guys do you feel better about than Tony Pollard right now?

Backup QB SZN is here; make sure you know who is throwing the ball to your wideouts.

The Jaylen Waddle dilemma is real, but you probably just have to start him and pray; he took you this far.

Look for every single edge over your opponent.

For a long time it felt like Philly, Dallas, and San Francisco were in the top tier of the NFC. As the 49ers sustain more injuries and Dallas continues to be coached by Mike McCarthy, it feels like the Eagles have tier 1 all to themselves.

This is turning out to be an incredible race. Jalen Hurts was perfect yet again this week and Mahomes had a few bad interceptions against Denver. If I had a vote, I would still be voting for Mahomes. As of now, Hurts has overtaken Mahomes as the favorite and if the Eagles finish 16-1… the voters probably won’t have a choice. That Eagles offense is just a beast and Hurts does it all.

The Seahawks are suddenly desperate for a win and face Brock Purdy and the 49ers on Thursday night. We get three Saturday games this weekend, with Dolphins-Bills in the primetime slot in what is a massive game for both teams.

I will be at SoFi Stadium to see the Chargers play a home game for the first time in my life. As excited as I am to see Herbert, I’m equally afraid of Derrick Henry.