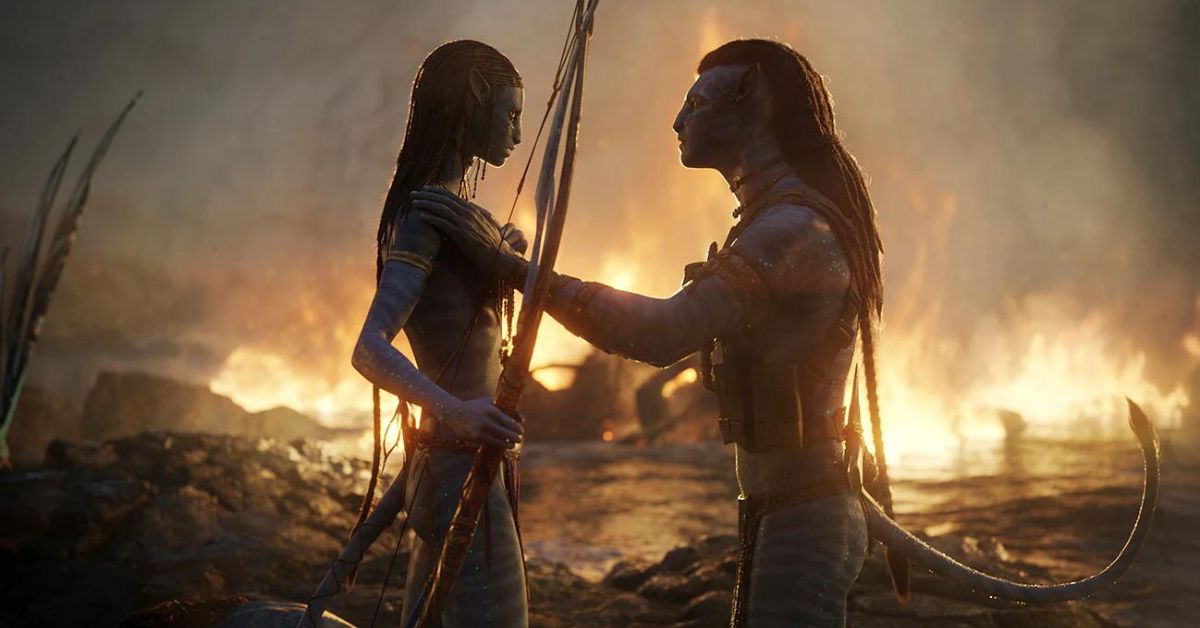 James Cameron’s long-awaited return to cinema Avatar: The Way of Water is here to wash us all in the glow of beautiful space nature and blue aliens! It’s not like any of us were dying to know what happened to the original Avatar characters after the end of the first movie. To be honest with you, I couldn’t have even told you the names of the Na’vi or the humans in the movie until I rewatched it back in early 2020 during the cinematic desert landscape that was the first wave of the pandemic. I won’t say I was eagerly anticipating the sequel or sitting through its 3+ hour runtime wearing a pair of 3D glasses over my normal glasses at the press screening I went to earlier this week. I’ve often called the original Avatar “the okay-est movie of all time” because it is so thin on plot, and the characters are extremely disposable. The visuals of Avatar were great, obviously, and that same thing is true for the sequel. There are plenty of camera and VFX nerds who will tell you all about frame rates and shit like that in their reviews. But I don’t care about all that very much, so for my Avatar: The Way of Water review, I’m going to talk about how James Cameron and the Blue Man Group made this one different and converted an Avatar apathetic like me to caring a little about and actually enjoying Avatar: The Way of Water.

There are kids now! Isn’t that fun?

If it’s been a while since you’ve seen the original Avatar, that’s okay. Don’t let these people lie to you and say it’s amazing and worth rewatching before you see Avatar 2. It ain’t. All you need to know is that there was this dude, Jake Sully, who got sent to the blue people world and was supposed to take all their natural resources for them but the power of nature and Blue Zoe Saldana (Neytiri) yams had my boy in love. So he stayed there, sent most of the humans back home, and GOT BUSYYYYYYYYYYYY. The first hour or so of Avatar: The Way of Water is just James Cameron reminding you of all of this. And honestly, it’s quite boring. But then Jake, Neytiri, and the kids must move out of the forest they live in and into the water tribe. I forget what it’s called, doesn’t matter. What does matter, is Jake and Neytiri’s kids!

They’ve got 2 sons by birth who have the whole older brother-little brother sibling rivalry thing going on. They have Sigourney Weaver’s daughter (she died in Avatar) they’ve adopted who is also played by Sigourney Weaver. They have a fully human kid named Spider, who got ditched on Pandora, whom they’ve adopted. And then they’ve got the cute little girl. Typical baby younger sister vibes! She’s adorable. I love her and will defend her with my life.

Avatar: The Way of Water Review and Analysis

Jake and Neytiri are very whack, stiff characters who I feel nothing for whatsoever. But you give them some kids they have to protect, and suddenly, I’m on board! There’s nothing groundbreaking happening with the plot. Basically, Jake and his family are set up like the first Black people to move into a new suburb. They look different, nobody really wants them there, and other kids make fun of them, but their dad is super focused on respectability politics and not creating a scene. But they’re kids, so of course, they always create a scene! They fight bullies, one of the boys falls in love with the first hot girl he sees, etc., etc. You’ve seen this movie before. But, Avatar: The Way of Water seems to have accepted that you know exactly how everything will go as soon as you meet these children. And that actually works in its favor! James Cameron doesn’t waste time by trying to write a good script or throw in a unique plot twist. He plays mediocre covers of the top 40 hits when it comes to the story, but he makes everything look cool as hell.

While they may sound like a bad thing, I’m dead serious when I say that I was really into the family dynamic and watching these kids try to do their own thing in the shadow of their father. Plus they have to deal with being mixed between Na’vi and humans, which is kinda cute. Once the story is all set up and you can finally just vibe with it and watch these kids try to learn how to swim and ride weird dolphin, eel, horse hybrid things into battles and shit, this movie kinda bangs lowkey.

You’re probably going to go see Avatar: The Way of Water in theaters if you haven’t already, and I recommend doing that. It’s a visual spectacle for sure. And we don’t get a whole lot of movies that feel like universal event viewing these days, so I’m excited that that’s back. If you go in expecting to have your mind blown by the story, you’ll be pretty disappointed. Avatar: The Way of Water relies on the age-old trick of throwing in some kids to heighten the emotion. But tropes become tropes for a reason. And this one still mostly works!

Grade: B
Recommendation: See it in theaters on the biggest screen format you can find. You don’t necessarily have to see it in 3D, but it was pretty cool.

Thanks for reading all that! Check out more of our movie reviews and pop culture coverage here on the site, follow me on Twitter @LordDexHinton, and check out our official movie podcast One Take Pod, wherever you get your podcasts.

In this article:Avatar 2, movie reviews, movies, movies and tv, reviews