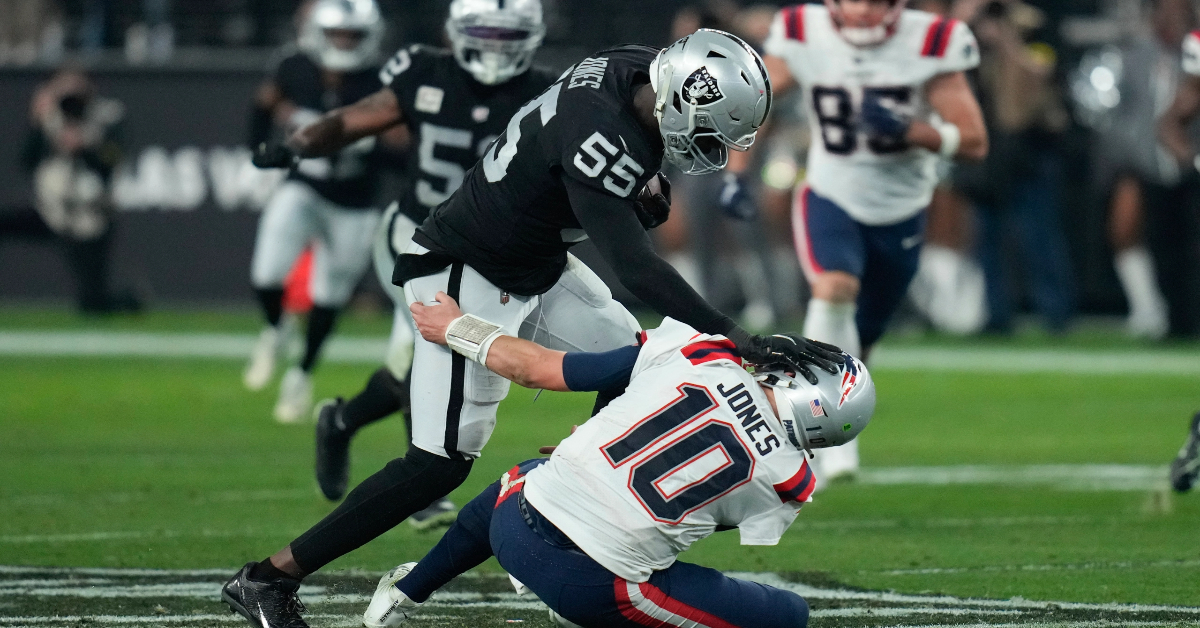 One of the most absurd NFL weeks in recent memory has come to an end. Teams across the league won and lost games every way imaginable and then some. It’s safe to say that if you think you know how the last three weeks of the year will play out, think again.

1. What happened in Vegas?

The most shocking moment of this NFL season came in Las Vegas where the Raiders picked up a 30-24 win over the Patriots. Neither quarterback played well in this game that was littered with flags and mental mistakes.

However, one mistake did stand out just a little more than the others. Take a look at the final play.

Let’s break this one down.

Step one: The situation

Clearly this game is tied. Belichick stated after the game that they did not feel like Mac Jones could get the ball to the endzone on a hail mary so they opted for a safe run. The last-ditch lateral play is often seen in the NFL but only when teams are TRAILING. Everyone claimed to have known the situation and the score, making this even more bizarre. Running a lateral play in a tie game and losing in this fashion is something the Falcons and Chargers of the world could only dream of. The fact that this happened to a Bill Belichick team is wildest part of the play.

Rhamondre Stevenson seems to be dodging a lot of criticism that he deserves in my opinion. It’s Stevenson who is the first player to go rogue and lateral the ball to Jakobi Meyers. Had Stevenson just run out of bounds or gone down none of this ever happens and Jakobi Meyers isn’t the face of one of the most embarrassing plays in NFL history. Stevenson handed Meyers a loaded gun and told him to shoot, yet it’s Meyers that is being charged with the murder. Meyers caught the pitch and thought, “OK I guess this is what we’re doing” the reactions on the Pats’ sideline after lateral one tells the story. This will always be the Jakobi Meyers blunder, but Rhamondre got this party from hell started.

We will never know exactly what Meyers saw when he went to throw the ball backwards. Perhaps his vision was blocked and he did not see Chandler Jones in the exact spot where the ball was thrown, perhaps he was intending to throw the ball elsewhere and simply missed his target. Unfortunately the real result was one of the most accurate passes in this football game. Meyers lays a catchable ball up in the air where only Chandler Jones can make a play, Jones does a nice job of high-pointing the ball and wasting no time getting up the field.

The intended target for the final lateral is none other than Mac Jones. While the ball is floating towards Chandler Jones, Mac knows the ball is going to be intercepted. You can see Jones widen his stance and get into a tackling position. What comes next is one of the worst attempted tackles in league history. Instead of pursuing Chandler Jones before he gets his momentum going forward, Mac stays on his heels as Jones barrels at him. Mac tries to grab the hip of Chandler, but is immediately thrown to the ground with a stiff-arm to the left shoulder. Mac is flung to the grass with no resistance whatsoever, ending the game and putting a big dent in the Patriots’ playoff hopes.

2. Jaguars come back from a 17-point deficit and now control their own destiny

The Jacksonville Jaguars were 2-6 at the end of October. Ever since the calendar flipped to November, Trevor Lawrence has been playing outstanding football and the Jags have gone 4-2 as a result. On Sunday the Jags trailed the Cowboys by 17 points late in the third quarter before Lawrence led the improbable comeback and secured the 40-34 OT victory. With this win and the Titans loss to the Chargers, the Jaguars suddenly control their own destiny in the AFC south. Jacksonville has the Jets and the Texans over the next two weeks before ending the year at home against the Titans. If the Jaguars can stay within one game of the Titans entering Week 18, that game will be for the division and a playoff spot.

While Lawrence still makes a fair share of mistakes, he has become a strong processor in the pocket with the ability to extend plays for big gains. The Jaguars were forced to drop back the entire second half against a menacing Dallas pass rush, yet Lawrence maneuvered the ball down the field time and time again, ending the game with 318 yards and 4 touchdowns. Everytime this game felt like it was over, the Jaguars responded with a gutsy play. The defense did enough in the second half and forced Dak to throw the ball into tight windows. When quarterbacks target covered receivers enough times, tipped balls leading to picks can become an issue and that is what happened on the final play of the game.

Unlike most teams in a South division this year, the Jags are actually fun to watch and root for. With the Titans dealing with a pile of injuries, Jacksonville does feel like the better team should the winner-take-all game in Week 18 come to fruition. Someway somehow the Jags are carrying legitimate momentum into a pivotal Thursday night game against the Jets.

You could certainly argue that the largest comeback in NFL history should be ranked higher on this list, but THIS Colts team against THIS Vikings team… I was only moderately surprised. The Colts are led by Matt Ryan who is most famous for… blowing a big lead. The Colts’ head coach was making guest appearances on First Take just over a month ago. Meanwhile, the Vikings have been pulling wins out of nowhere all year long.

Jonathan Taylor was injured early in this game and perhaps if the Colts had him in the second half they would have been able to put the game away on the ground. Instead, the Colts were forced to punt five times in the second half with some turnovers sprinkled in. The Minnesota crowd smelled blood in water almost immediately and was raucos during the rally. Kirk Cousins found K.J. Osborn and Justin Jefferson time and time again, coming up with a big completion each time one was needed. One on hand, any team that falls behind 33 points to the Colts at home should not be taken seriously. But on the other hand, the Vikings just keep battling back and finding ways to win. It takes a tough team to go down 33 and not throw in the towel. While the Vikings are not a real contender by any metric or by the eye-test, the team is tough and does have great weapons on offense.

The Vikings are pure chaos and embody this 2022 season more than any other team. It’s time to stop resisting the Vikings and just lean into the madness.

4. The Bills win the snowball fight against the Dolphins

Not many people gave the warm-weather Dolphins much of a chance in frigid Buffalo on Saturday evening. Credit to the Dolphins for coming out ready to play, providing fans with one of the best games of the season. Bills mafia was hurling snowballs onto the field and at the Miami sideline for much of the first half. So much so that the game was delayed in order to try to get the fans to stop.

On the field, Josh Allen put on a show. Every time the Dolphins made a huge play and looked to capture the momentum, Allen had an answer. Miami had the running game working and Tua played better than many thought he would in these conditions after his last two games. But in the end it was Allen that got his team into position to win the game on a last-second field goal. Neither of these teams are perfect. The Bills’ defense is vulnerable and the Dolphins are limited by their QB at the end of the day. But both teams are more than capable of making a run in January if a few things fall the right way.

With this win the Bills clinched a playoff spot and remain in position to grab the lone BYE in the AFC. The Dolphins are now 7th in the conference and are far from a lock to make the playoffs. Even in defeat, the Dolphins showed the ability to compete in the cold and are a team nobody should be clamoring to play in round one.

After going on the road and finding a way to beat the Jets, the Lions have won 6 of their last 7 games and sit at 7-7 after a 1-6 start to the year. No team has ever made the playoffs after starting 1-6, but Lions enter the final three weeks of the year with a real shot to change that and make history. A 3-0 finish against the Panthers, Bears, and Packers would almost certainly get the job done, while a 2-1 finish still leaves room for Detroit to sneak into the dance.

After spending much of the year ranked in the 30s, the Lions’ defense has been great of late and is now 22nd in defensive DVOA, per football outsiders. The improved play by the Lions defense has allowed the offense to stay in neutral game scripts, where OC Ben Johnson can best put Jared Goff in a position to succeed. While Dan Campbell is still prone to brutal game management mistakes, he and his entire coaching staff have done an incredible job making adjustments and keeping this group bought in after a horrid start. Over the past two months the Lions have clearly been either the third or fourth best team in the NFC. Detroit would be legitimately scary to play if they make it to wildcard weekend. The defense is no longer getting gashed for huge plays while the offense is solid in every aspect and is extremely well coached.

Lions fans deserve this one to say the least. It would be great to see this team make history and make wildcard weekend a lot more interesting in the process. I’ll be rooting for things to fall Detroit’s way down the stretch.