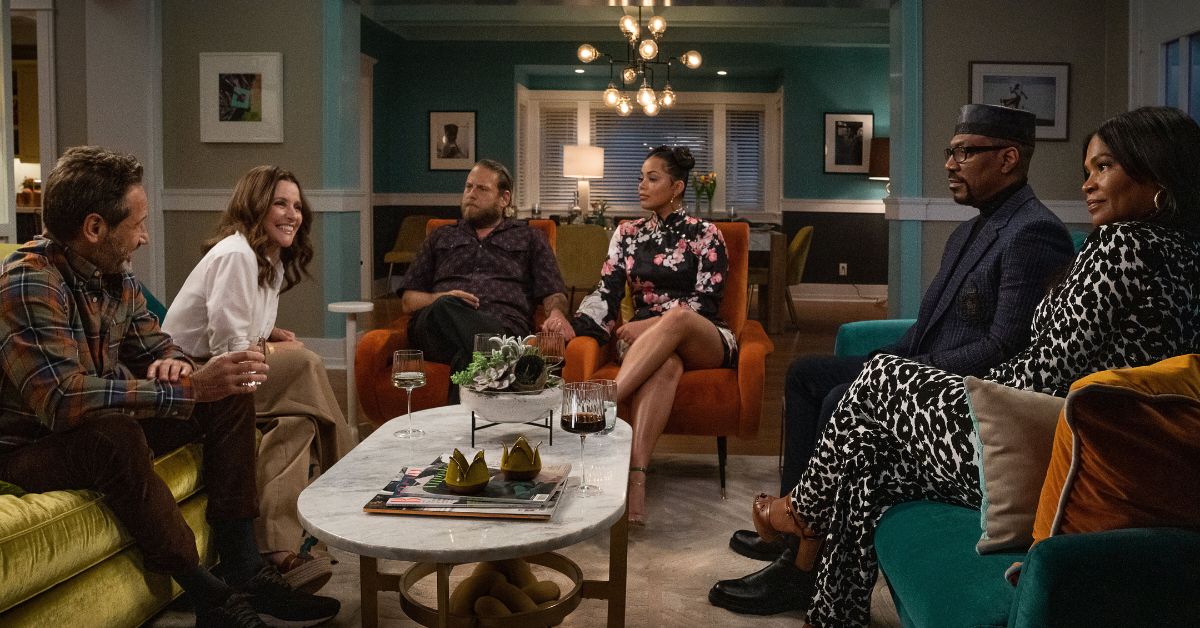 You People, Netflix’s new film starring comedy all-stars Jonah Hill, Eddie Murphy, and Julia Louis-Dreyfus, along with noteworthy names like Lauren London, Nia Long, and David Duchovny, isn’t a bad movie, necessarily. But at this point, Director Kenya Barris has a track record of fascination with interracial relationships that I cannot ignore. Ultimately, that obsession is what holds You People back, making it merely the latest mediocre entry into this overdone genre of mixed-family wedding movies. You People is a particularly frustrating kind of movie for me. Not because it’s particularly offensive or even bad, but it’s a “we need to have the conversation…” movie that has absolutely nothing new to say.

What is Netflix’s You People about?

You People’s premise is simple enough. Jonah Hill plays Ezra, a Jewish finance bro living in LA and hosting a podcast with his Black lesbian friend Mo (Sam Jay) about what he calls “the culture”. He loves rap music, streetwear, and hyped sneaker collabs. You know, ’cause he’s not like OTHER white guys! Jonah Hill eventually meets and falls in love with Lauren London’s Amira Mohammed. If you know who Lauren London is or what she looks like, you know that quite a few societal expectations are being upended by someone like Lauren London being in a relationship with Jonah Hill. The movie aims to explore those societal expectations, examining modern love and some of the generational differences between Ezra, Amira, and their parents who are much more religious and set in their ways.

Eddie Murphy and Julia Louis-Dreyfus do most of the heavy lifting on the generational differences front. Amira’s parents, Akbar and Fatima, played by Murphy and Nia Long are devout Muslims and what you might call radically Black. Eddie Murphy proudly wears a “Fred Hampton was Murdered” hoodie in one scene and smugly praises Louis Farrakhan, a notably anti-semitic leader, to Louis-Dreyfus and David Duchovny when they meet. Not to be outdone in terms of “offensive” comedy (none of it is really that offensive), Julia Louis-Dreyfus plays Shelley, Ezra’s mom and the annoying type of problematic woman who is way too excited to try and impress Amira with her thoughts on police brutality and Chris Rock’s Good Hair documentary.

Positives for You People Netflix

The clashing cultures trope isn’t particularly new or interesting. We’ve seen it a million times before. But the nimble roster of comedy heavy hitters in You People is pretty well equipped to deliver some laughs throughout. Jonah Hill and Julia Louis-Dreyufus are given the most time to shine, with Eddie Murphy playing a much more subdued role than the comedy legend has been known for. Nia Long, David Duchovny, and Lauren London are all largely passengers for the comedy that takes place around them, but they handle that well. The biggest bright spot of the movie is that the two families in You People do feel somewhat real, at least when guests like Deon Cole and Andrew Schultz aren’t on-screen taking things to the extreme. Jonah Hill, Lauren London, Julia Louis-Dreyfus, and Eddie Murphy play people you’ve seen before in real life and make sense. As a Black guy living in a major city with a lot of white friends, I know guys like Ezra really well, and I’ve witnessed their parents’ inevitable weirdness when they get into interracial relationships. That level of plausibility and earnestness are You People’s biggest asset.

Additionally, You People’s whole clashing cultures examining modern love trope may be overdone, but if you’ve enjoyed it in largely forgettable but mostly fine movies like Guess Who, Our Family Wedding, Jumping The Broom, and others then you’ll get exactly what you were expecting. Watching Ezra and Amira react as the other’s parents embarrass themselves at a Bachelor Party or on a trip to Palm Springs is pretty good content, even if it won’t change your life. And it doesn’t really need to considering You People is a Netflix comedy. But that’s where the good things I have to say about You People really end.

For those of you unfamiliar with the name, Kenya Barris is best known as the Black-ish creator responsible for the terminally safe Anthony Anderson comedy series that wanted allegedly wanted to shake up the conversation about race in America but ultimately always felt more like a way to make white people feel smart and not racist than any actual tool for conversation. Barris, who co-wrote You People with Jonah Hill, went on to turn Black-ish into multiple spin-off series called Grown-ish and Mixed-ish. He also released a short-lived Netflix show (starring himself) alongside Rashida Jones, called #blackAF where Barris tries to deal with the pressure of being a “new money” Black man married to a woman who is half white.

You People, Netflix’s fifth project with the director, falls into all the now familiar traps of a Barris movie/show. The script’s plentiful thin stretches all overly rely on the same types of jokes we’ve seen a million times about white people interacting with Black people, but not in any way that’s new or interesting. Akbar and Shelley trade barbs about whether slavery or the holocaust was worse. Jonah Hill, Lauren London, and their parents argue about whether a Rabbi or an Imam will officiate the wedding. Eddie Murphy tries to get Jonah Hill to say the full title of the song Ni***s in Paris, a joke that’s been made over and over again on social media since the day that song came out. Jonah Hill wears a red hoodie to a barbershop in a Crip neighborhood and gets intimidated by gang members. Everything goes exactly as you would expect it to at every turn. All of these things are fine. Some of them are actually really funny because of the strength of the cast.

The problem, as seems to be the overwhelming trend for Barris at this point, is that You People isn’t interested in actually saying anything about any of the subjects it touches. The script is mostly content to just point out some mechanism of interracial marriages that Barris is fascinated by and go “ain’t that crazy???” But none of those mechanisms have changed in the two decades Barris has been writing television, and neither have his jokes about them. What’s worse is that because Barris has nothing to say about the random phenomena he notices when Black people date white people other than to “hold up a mirror” to the audience, he has no idea how to resolve any of those problems in his script. So the resolution of the movie happens almost entirely offscreen and then You People just…ends.

You don’t have to hold the audience’s hand and teach them a lesson in your movie, but if you’re going to spend decades making tv shows and movies about interracial marriage, for the love of God, man you’ve got to make a point in there somewhere. Kenya Barris still hasn’t, and You People will likely go the way of #blackAF, Cheaper by the Dozen, and his other forgettable failures before it because of that.

Grade: C-
Recommendation: It’s on Netflix so stream it, but don’t go in expecting much more than you saw in the trailer.

Thanks for reading all that! Stay locked into Apollo’s Pop Culture coverage for more movie and television reviews. Check out my list of the Best Movies of 2022 and my review of Avatar: The Way of Water which just passed $2 Billion at the box office. We’ll have a review of 80 For Brady up soon so stay tuned!

In this article:movie reviews, movies, movies and tv, netflix, reviews