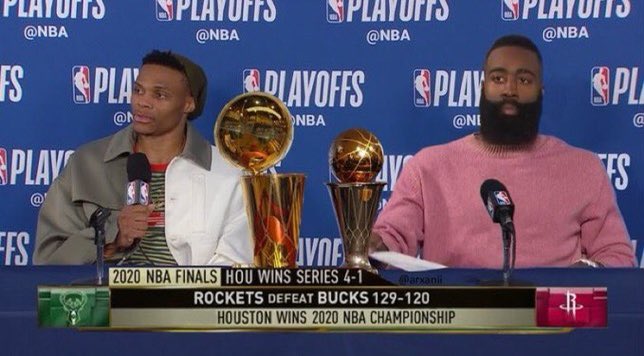 THE NBA IS BACK. Well, for the most part – ESPN’s Adrian Wojnarowski announced via Twitter this morning that the NBA has plans to move forward with 22 teams playing eight regular season games before ultimately starting the playoffs in its typical East-West conference divisions.

The schedules will follow their typical path from the regular season but skip over the opponents who are not part of the return-to-play order that’s been devised. This means the Rockets will play the Lakers, Trailblazers, Kings, Mavericks, Bucks, Pacers, 76ers, and Raptors.

While this may seem like a brutal stretch of games, the Rockets currently have a 7-6 record against teams remaining on their schedule and are already assured a playoff spot with their lowest-possible finish being the seventh seed. They can climb as high as the third seed in this format, but with all remaining regular season and playoff games being held in Florida at a Disney resort, homecourt advantage is not nearly the factor it typically is. The Rockets (and other teams) will likely angle for matchups more than they will a higher seed. Some of the incentives for attaining a higher seed that have been floated include extra possessions, an extra coach’s challenge, and additional timeouts.

The NBA plans to begin playing games on July 31st, where multiple games per day will be played across two arenas. When the playoffs begin, the NBA plans to play between two and four games per day in earlier rounds and will cut that number in half for later rounds. All rounds will continue to be best-of-seven, with the latest possible date for the NBA Finals Game 7 set at October 12th.