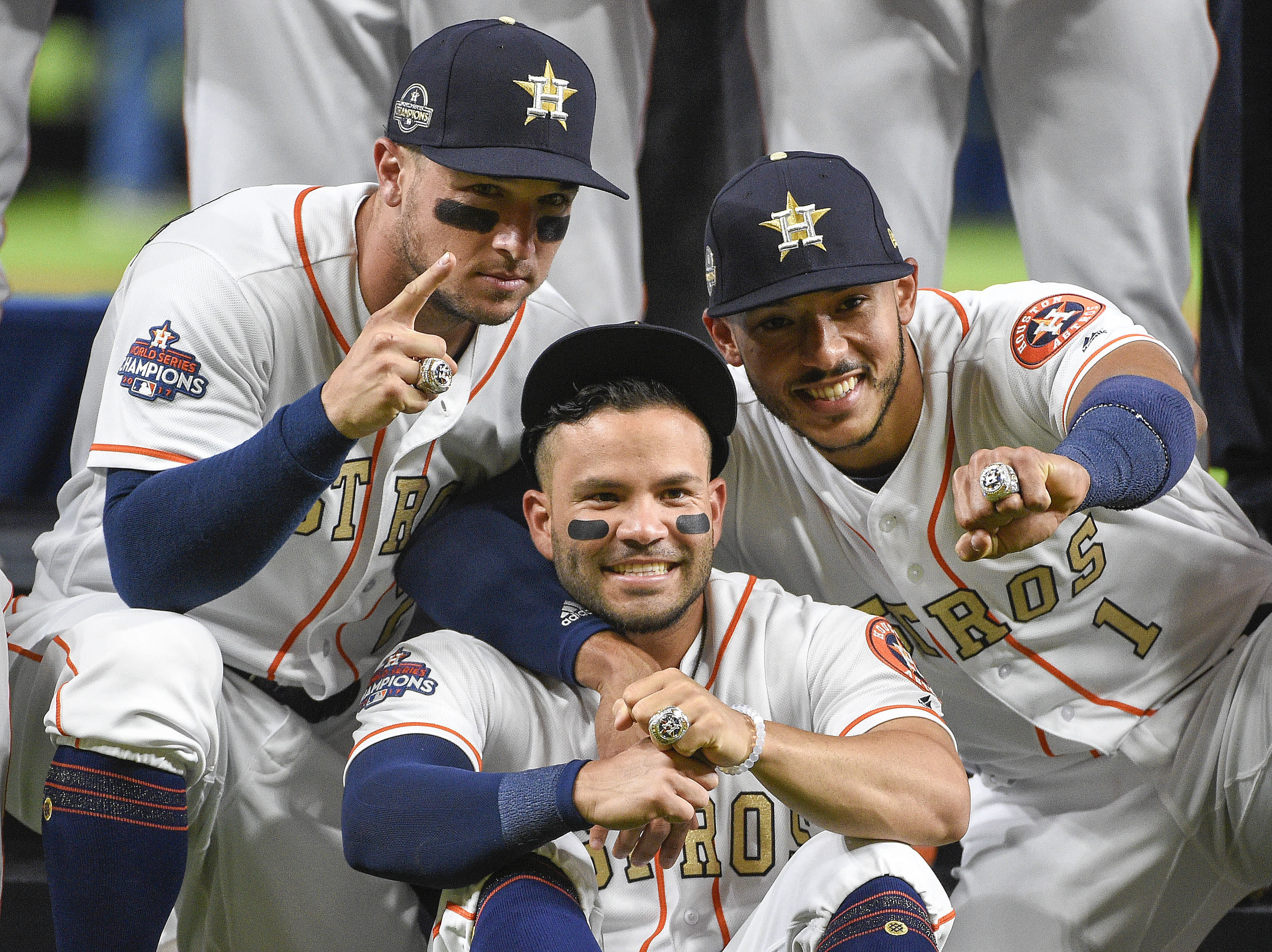 MY OCTOBER THOUGHTS ARE IN ORANGE

We will jump into why you are here in a second, but as I worked through Part 2, we are still a FUCKING LOADED squad. I am usually very bearish and protecting myself from heartbreak, Houston, but here we are on the eve of Opening Day, just all in. Is that a me problem? It just might be, but I am a mad man; even Willy Wonka wouldn’t want to step inside the factory I call my brain.

Narrator, we were loaded.

Fuck it, I’ll drop the link right now for those that wanted to read. (Apple isn’t ready yet)

So now why everyone is here. The final rankings for this Opening Day Roster for your 2021 World Series Champions.

“Wow, Dez, how can you have a total unknown at #13?!?” Look, I get the reservations; I really do, but what we have here is a failure to communicate. Myles Straw has ELITE speed. Like top class and you can’t teach that. Yes, he has to get on base but when he does it is an automatic double and he turns over the lineup for Altuve-Brantley-Bregman. He may lead the league in runs scored and stolen bases this year. How about that for a take?

The hard-throwing right-hander who can’t stop smiling and enjoying the moment comes in at the 12 spot. This kid is just fun to watch play baseball, man. He reminds me of Yordano Ventura. He will be Dusty’s swiss army knife and can be thrown in any spot, and I know he will get out. HUGE Cannoli guy.

Just flat out wrong again, Enoli spent most of his year in SUGAR LAND!! Idk if he was a sticky stuff bandit but he was terrible this year.

El Reptil is our day 2 starter, and I think he is a silent assassin. He operates so smooth and throws that invisible pitch and collects outs like we collect ALCS appearances, in bunches. I want to see him make the jump to a bonafide starter this year as we have a full season and not a sprint. Our Day 2 starter is outside the top 10?! Bananas.

What a rollercoaster with Javier, elite stuff, was a great starter then moved to the bullpen for Odo and just lost all his confidence. Move him into the 18-22 range in the new post recap rankings.

El Jefe, the pride of Mexico, the guy who might get in the Cy Young race is the #4 guy on this staff is one of the best. I got to see him in Spring Training, and Jose looks great. The changeup was there, the slider was sharp, and the fastball had the giddyup. Every time you think is this moment too big for Jose; he goes out and dominants World Series and playoff games. His Baseball Savant numbers do not jump off the page, but I am a results guy, not a numbers guy.

I think JU is slightly overrated in my rankings, just because he was hurt all year. Luis Garcia screams past all these guys.

He was AJ’s high leverage guy and was ELITE. A freak injury set him back, and now as we enter 2021, he is fully healthy. Ben made a great spot in his delivery that it looks like he is back to that form we expect. This will be found money if he is back to that DUDE. Even when he is not on, he is still a great bullpen arm.

Yeah, he was healthy and ELITE.

Our guy, the first pro athlete to back Apollo and made this crazy dream a reality. LMJ just got paid a BILLION dollars to stay here for 6 more years, and I am happy for him and Kara. We know what we got with Lance; when he is on, he has Ace-type stuff, and when he is off, it can be rough sometimes. With the contract extension, Lance becomes the vet for all these young guns and continues the tradition of winning and not giving a fuck but going out to compete day in and day out. I think Lance takes that next step and fully recovered from Tommy. I would buy all the $LMJ stock.

STAFF ACE STARTING GAME 1 OF THE ALDS LANCE McCULLERS JR. LETS FUCKING GO! I MIGHT HAVE BEEN SPOT ON WITH WHAT I WROTE ON LANCE AND PRESS.

Sooner or later, I will spell his name correctly. I always get tripped up; that’s why I just put ZG on every tweet. Truth Circle moment right there. Our Ace, who defies time and space, is just an absolute wild card. I have always been waiting for the other shoe to drop and say, “See, you cant throw 86 MPH in The Show?!?” But the dude is just Dr. Strange. I am done trying to figure it out because he puts my mind in a blender like the batters he faces. I will enjoy this year with him as it will probably be our last year with ole ZG.

ZG is now our bridge guy due to a COVID IL stint and an injury. One last ride with this cowboy. Not properly rated.

He will be a 30/30 guy. The kid is a freak. When we got to Spring Training, you could tell he packed on some mass, and the only problem I have with him is he was talking to us in RF in the middle of the game. Kyle Tucker was the guy Jeff told every front office to kick rocks on, and last year, we saw in the sprint why he said that. I am all in on Tucker; he can anchor this lineup with zero expectations because it has All-Stars all around him. ZERO PRESSURE. Just go out and rake every day.

I AM A GENIUS. KYLE TUCKER HAS MADE ME LOOK LIKE A BRILLIANT BASEBALL MIND! WHAT A SEASON BY THE KID.

My son Yordan is like a fever dream; did he ever exist? I saw him on the backfields in 2019 during spring training, and I immediately told anyone who would listen to believe this guy had it. He didn’t let me down. The only problem is staying on the field, but when he does, he is our David Ortiz. He will break the Astros franchise record of home runs this year.

Ok, maybe I was wrong with him breaking the franchise record but he had 33 BOOMBAHS and 104 STEAKS. I LOVE YOU SON.

Not many former MVPs would be #4 on a team’s power rankings, but here we are. For some apparently dumb thinking by every fan outside of the Houston city limits, Altuve was the scapegoat for the alleged cheating scandal. I think it wore on him last year, but the thing with GOATs is they may slip off the mountain rocks, but they do not fall. I think we will see a pissed-off Jose, and we will see what he does, which is just a hit. He is 30, so we are, in theory, at the peak years of his prime.

The power was there for Altuve and when he is on he leads the offense and is the glue. He also looked so healthy mentally with everything they experienced traveling this year.

He was a Blue Jay until he wasn’t. Hey, rather be lucky than good. Brantley just hits and barrels balls at a rate I have not seen in a long time. I stand steadfast that his signing and resigning when we look back at this golden age of the Astros was the foundation. You can’t teach what Michael Brantley does. You either have it, or you don’t, and that’s why he is my #3 in the power rankings he has it.

Yuli won the batting title over Uncle Mike just slightly and I had Yuli ranked 15th!!! Wow, what a miss on my part. Anyways Uncle Mike is so damn pure at the plate. Probably overrated him slightly in these rankings.

I am just going to soak in every game and moment that we have with Correa. If we fail to resign him, then it is a travesty by Click and Crane. Carlos was the 2nd athlete who supported Apollo, and I will be forever indebted to him for that. He is a budding superstar, the captain of the team, and Mr. October. Suppose you don’t give him a blank check; someone else will. What else is there to say?

He should be #1 but I wasn’t wrong on anything else, he is a superstar now, the captain, and Mr. October. PAY THAT MAN HIS MONEY.

I was wrong here, Bregs had another year that was plagued with a Quad/Hamstring. It doesn’t matter now because it’s the playoffs this is where we need him to be the MVP.

It is go time for Apollo Media and for our Stros. Nothing is better than this.