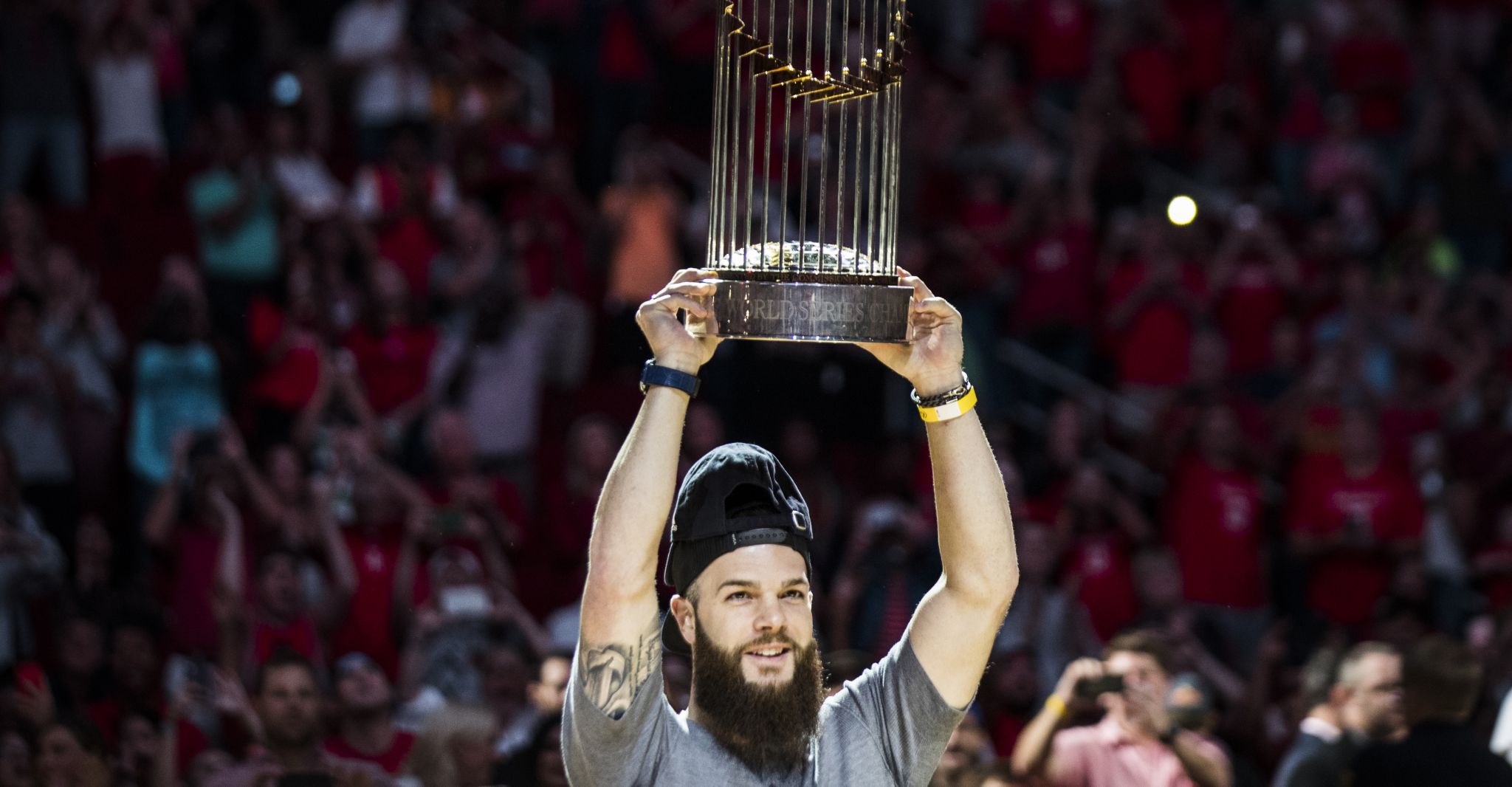 Dallas Keuchel’s first start at Minute Maid Park since game 3 of the 2018 ALCS is slated for Sunday’s afternoon game. The park will undoubtedly be packed out. The crowd will be reminiscing of Keuchel’s time in Houston. He spent 10 years with the organization, 7 of which were in The Show. The White Sox are coming into town leading the American League Central (a trash division) by a nice margin – 3.5 games ahead of the Cleveland Indians at the time I’m writing this. I’m trying to let bygones be bygones but I still have a bad taste in my mouth from 2005.

Not only was Dallas around for some of the most abysmal years of the Astros existence, he was there for the largest moment of it all – the 2017 World Series championship. Dallas hoisted that trophy over his head on the field and at the Championship parade. Hell, he even brought it to a Rockets game (pictured below) – and he went through hell to get to that moment. A team that lost 100 games 3 years in a row – 2 years of which he was there for, had just won the World Series.

During his tenure with Houston he was decorated with a lot of accolades. 2 x All-Star. 4 x Gold Glover – largely in part for his knack to produce a lot of ground balls from hitters so he can snag the “comebackers.” His 2015 season was his career defining year as an individual, bringing home the American League Cy Young over names like David Price, Sonny Gray, and Chris Sale. He burned down the Yankees in the 2015 AL Wild Card game.

His path to the World Series in the 2017 season was nothing to sniff at either. Although he wasn’t the workhorse he was in 2015, he still posted 14 Wins and a 2.90 ERA with a 1.1119 WHIP throwing 145 innings for the Stros. Facing Clayton Kershaw in game 1 of the World Series was a daunting task, and the Astros lost that game 3-1. But as they say “all’s well that ends well” and the Houston boys brought home the commissioners trophy.

Facing off against his former team, for the first time, in their house, must be a strange feeling. After all, he helped create the momentum the Astros have been riding for the past 6 seasons. We know Dallas is close with a lot of the players remaining on the roster from 2018 when he left – most of all Lance McCullers Jr. which Keuchel has referred to as being like his son, and mentioned to 790 media members how happy he is that Lance got a long term bag from the Stros.

Since Jeff Luhnow has left the building Keuchel has told Chicago White Sox writer Scott Merkin he has no qualms with anyone on the team and they’re mostly his buddies.

Only two of the current Astros have faced Dallas on the mound. Michael Brantley hits well off him with a .300 average in 10ABs with 2 homers. Maldonado on the other hand has struggled in 11ABs hitting for a .182 average, BUT has also hit a home run off of Keuchel. Nobody else has seen his stuff from the batters box, aside from maybe a few hacks at practice or in simulated games. We know Dallas isn’t a first inning guy and takes a few outs to get settled in. Lately the Astros have been scoring a lot early, and a lot late. I think the keys to success are jumping on him early, and preventing him from expanding the zone with his off-speed pitches. Dallas ain’t a velocity guy and never really has been. As long at the Astros dont chase pitches out of the zone and wait for their pitch, I foresee them doing a lot of damage to Keuchel and the White Sox.

When all is said and done I can honestly say I miss watching Keuchel pitch for Houston. The fact that he was there for the years when the Astros turned it around means a lot to me. He paints corners. He fools hitters. He has a killer beard. For me, personally, it will be an odd site seeing him on the bump wearing black and white in MMP even though it’s been 3 years. The man faced nearly 5,000 hitters in an Astros uniform, and I watched damn near all of them.

My bold predictions – Altuve hits a leadoff homer. Brantley goes 3-4 with 2 doubles – lefty v lefty. Whatever happens I’ll always be grateful for the moments he gave us as Astros fans. With that said I also hope the Stros shellac him for 20 runs.