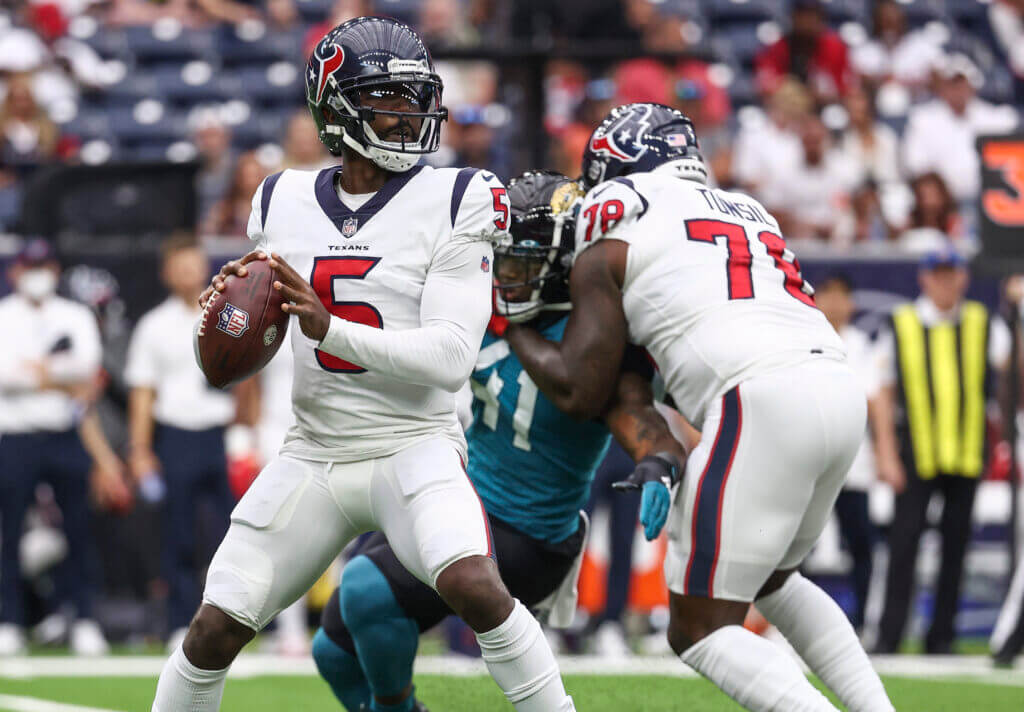 The Houston Texans dominant 37-21 victory over their division rivals, the Jacksonville Jaguars, came as a surprise to many. For most of the off-season and preseason, the thought was this Texans team had the worst roster in the league. Many fans and pundits did not give the Texans much chance without their All-Pro quarterback Deshaun Watson.

Most people had no clue about David Culley. Also saw many of the Texans signings as bandaid on a sinking ship. Nick Caserio, the long-sought-after general manager. I went with the quantity approach bringing in several veterans instead of one splashy name.

The Houston Texans showed that bringing in professional and dependable players like Tyrod Taylor and Mark Ingram makes a big difference. Let’s break down each side of the ball to show how the Texans dominated this game from start to finish.

Many people forget that coming into last year, Taylor was in line to start for the Chargers. However, a horrible medical mistake (A team doctor punctured Taylor’s lung) and the emergence of rookie Justin Hebert ended Taylor’s time with the Chargers. Taylor had seen this picture before as the Bills decided that Taylor wasn’t the future and eventually drafted Josh Allen. The same thing happens in Clevland with the Browns drafting Baker Mayfield.

This game should not have come as a surprise, though, as Taylor has been a solid quarterback his entire career. Taylor is third since 2011 in interception percentage ( Yes, third!) In the win over the Jaguars, Taylor started slow but started hitting receivers in stride and showing off his mobility, as you see in this 50-yard bomb to Brandon Cooks.

Taylor finished the day 21-33 291 2 TDS and zero interceptions. The running game, which hasn’t gotten much press, was lead by another veteran player Mark Ingram. Ingram had several nice runs all game long, finishing with 26 carries, 85 yards, and a TD. Taylor actually finished second in yards with 40 yards on the ground. Phillip Lindsay didn’t get as many carries but did find the paydirt as well. David Johnson rounds out the backfield and found the end zone on a short touchdown pass in the 1st quarter.

Cooks led all receivers with 5 catches, 132 yards. Pharaoh Brown, the four-year tight end, finished second with 67 yards. Danny Amendola, who grew up in the Woodlands (if you haven’t heard), found the endzone by some chance.

With the departure of JJ Watt and the recent trade of Bradley Roby, not much was expected of the defense. What many weren’t taken into consideration was this is a Lovie Smith defense. The Texans don’t have the most talent or big names, but they are a disciplined defense. They harassed Trevor Lawrence into 3 interceptions. Even though he finished with 332, most came in garbage time.

Here is a good example where the Texans get a great push up front, leading to a Christian Kirksey interception.

The Texans held the Jaguars to 21 points and controlled the line of scrimmage the entire game. For at least one game, the secondary played well and did not get beat down the field.

It’s just one game versus the worst team in the league and a rookie quarterback. Those are the facts, but you also can’t overlook how well the team was prepared. Culley wasn’t a household name when the Houston Texans hired him. However, what Culley has brought from day one are structure and a disciplined team. You can see this by looking at the Texans only having 5 penalities compared to 10 for the Jaguars. Will this team make the playoffs probably not, but they will not be an easy out for any team this year.

Week 2 Your first-place Houston Texans travel to Cleveland to take on the 0-1 Browns.

For all your Houston sports news and merchandise, visit ApolloHou.

In this article:Houston Texans, NFL