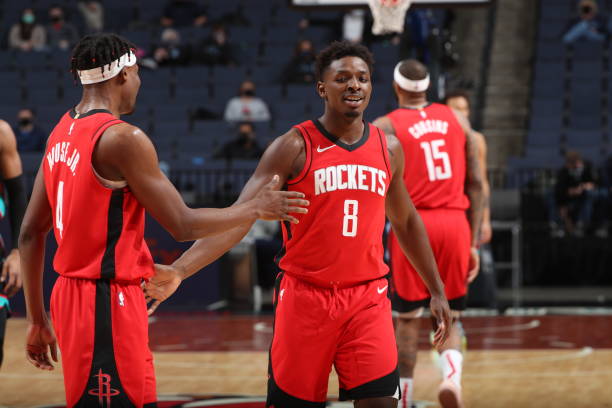 MEMPHIS, TN - FEBRUARY 4: JaeSean Tate #8 of the Houston Rockets high-fives teammate Danuel House Jr. #4 during the game against the Memphis Grizzlies on February 4, 2021 at FedExForum in Memphis, Tennessee. NOTE TO USER: User expressly acknowledges and agrees that, by downloading and or using this photograph, User is consenting to the terms and conditions of the Getty Images License Agreement. Mandatory Copyright Notice: Copyright 2021 NBAE (Photo by Joe Murphy/NBAE via Getty Images)

Ever since The Athletic’s Shams Charania tweeted that John Wall will not suit up for the Houston Rockets this season, the widely expected starting lineup on social media has featured Kevin Porter Jr, Jalen Green, Jae’Sean Tate, Daniel Theis and Christian Wood. Fans are excited by the prospect of starting the backcourt of the future, alongside First-Team All-Rookie Jae’Sean Tate, All-Star caliber big man Christian Wood and recent free agent acquisition Daniel Theis.

However, contrary to popular belief, I do not think Theis should start alongside Wood , but that the Rockets have better options at power forward. Let’s dive in.

Last season, when the Houston Rockets were at their best and strung together six consecutive wins, they did so by constructing the league’s best defensive team, starting Tate and PJ Tucker in the front court next to Wood.

Helped by David Nwaba’s electric energy off the bench, the Rockets limited 3-point attempts and makes, were at the top of the league at forcing turnovers, and relied on Wood’s presence in the middle as a defensive anchor. Before he got injured, it was undeniable that even though Wood got muscled by bulky centers at times, the team could build a highly competent defense around him.

Focusing on Wood, the player who’s expected to be effected the most by this decision, his advantages on offense emerge from his diverse skillset which enables him to be a walking mismatch at the five spot. The vast majority of centers in this league struggle to guard a 6-foot-10 guy who can finish, catch lobs, shoot and dribble with ease.

Notwithstanding, it was evident last year that when teams could afford to guard Wood with big wings, his impact was mitigated. While still effective, his skillset wasn’t as hard to guard, and he lacked the strength to bully slightly smaller players for buckets consistently.

Circling back to the defensive side of the floor, the Rockets did try to play Wood at the four last season, pairing him with Kelly Olynyk, where Wood often struggled guarding perimeter threats, lacking defensive feel, quickness and willingness to close out on shooters. That should come with a caveat, however, that Wood didn’t look as athletic coming back from the injury.

To be fair, those lineups did do quite well on the other end, inspired by Olynyk’s brilliance, though I’m afraid that without improved creation from the guard spots, that offensive success will not replicate itself.

While Theis isn’t a non-shooter — attempting over two three-point attempts per game last season — he isn’t a volume shooter, either. Philadelphia 76ers fans can explain better than anyone how relying on a low volume shooting big for spacing can have a negative effect.

Just to be clear here, I liked the Daniel Theis signing, and not just from a trade perspective. He’s a competent, starting caliber center and Houston only had one of those last year, which is a major reason they lost 20 consecutive games immediately after Wood went down with an ankle injury. Theis is a great vet to have on a rebuilding team, a good mentor for rookies Alperen Sengun and Usman Garuba, someone who makes life easier on his teammates on both ends of the floor, and whose grit is admirable (can’t forget about the Theis seals!).

I’m also not saying he shouldn’t play next to Christian Wood, who will appreciate having a defensive minded, versatile big to share the floor with. Theis’ big man skills could prove themselves quite valuable in a variety of matchups, and he offers coach Stephen Silas a double drag option. I simply would rather see him contribute off the bench, not spending the majority of his minutes with Wood on the court, prioritizing spacing and wing skills in the starting lineup.

As to who should start- well, the Rockets have a multitude of options here. If prioritizing youth and development in the starting lineup is the plan, they could go with KJ Martin next to Tate in the forward spots for a combo which kicked ass defensively last season, assuming they believe in Martin’s shooting and ability to contribute as a starter. Danuel House serves as an another interesting option, as someone who is more of a sure thing at the small forward position and has been a good connector and all around player when healthy in Houston. David Nwaba and Khyri Thomas are long shots as guys who contributed beyond expectations last year in a smaller role/sample, and you could always throw one of the rookie bigs into the fire for the most fun and chaotic outcome possible.

Regardless of the decision at the power forward position, the Houston Rockets should have an exciting year of development, featuring a potential ROY and MIP candidates. For the first time in a long time, they will be going into the season with no expectations to win big, and that is quite refreshing.