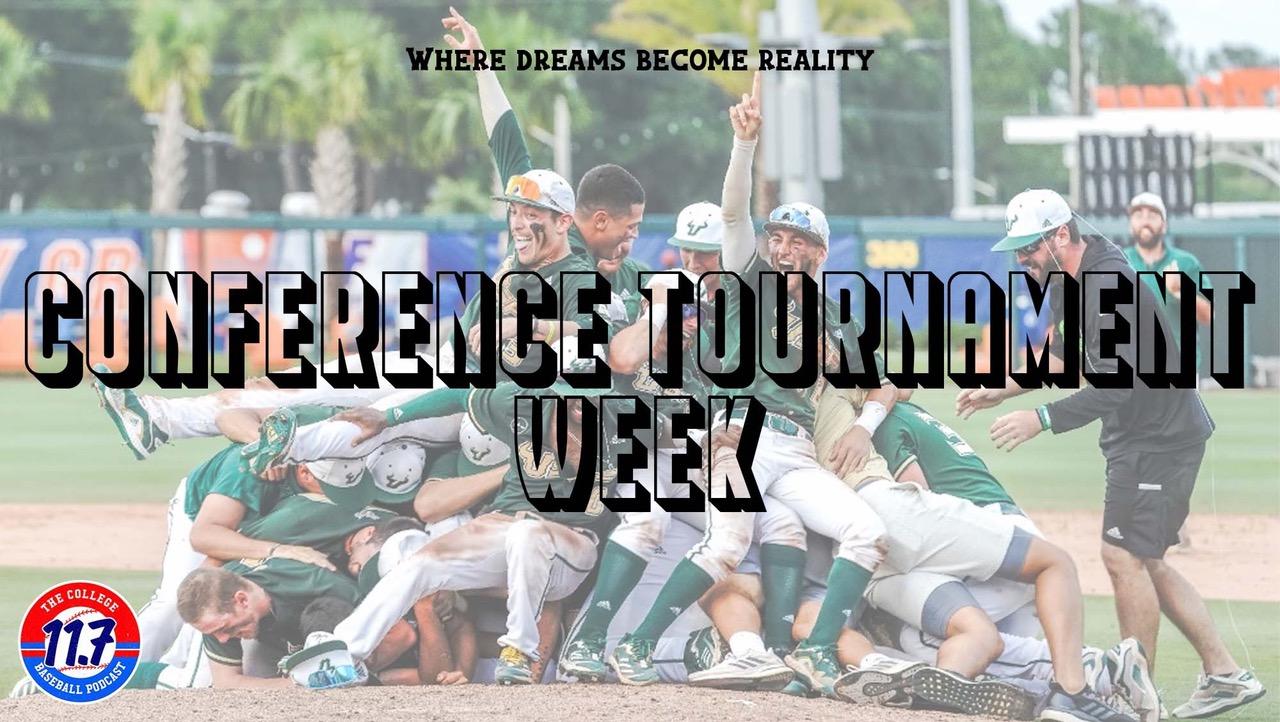 Twenty Eight Conference Tournaments to follow seems like too much for the average fan. Don’t worry, we decided to make a central hub for all tournament brackets/links, basically everything you need in one central location for conference tournament week. Maybe you just want to tune into championship games to quench your dogpile thirst or catch a 9am game while bored at work. Whatever the case may be, you’re in the right spot. Hope you enjoyed the regular season and 11.7’s coverage throughout. But now, welcome to the best time of the year, POSTSEASON COLLEGE BASEBALL!

The ACC Tournament in Charlotte is a controversial Pool Play format where each pool winner advances to semifinals. Plenty of valid arguments for and against it… reasons include saves pitching and promotes more quality games. Negatives are it creates meaningless games when certain pools already have a “winner” with a game to play. Clemson, Wake Forest and Georgia Tech all are fighting to extend their seasons with strong showings. Miami Louisville and Virgnia Tech seem like safe locks for national seeds baring very poor showings. The ACC was the strongest conference this season, so this should be an entertaining tournament. All games will be televised on ACC Network/ESPN.

The SEC baseball tournament in Hoover has a messy bracket but is pretty straightforward. First round is your “play-in” games aka single elimination where winners enter the double-elimination part of the bracket. If you are a lower seed fighting for an at-large/hosting bid or even need an AQ bid (Kentucky/Alabama), odds are stacked against you where you need to win 5 games. Florida Vanderbilt Georgia Arkansas all seem to be on the outside of the hosting picture and need a strong showing to have a chance. History shows, the SEC tournament gives teams every opportunity to boost their resumes. All games will be televised on SEC Network/ESPN.

The Big 10 tournament will be at Charles Schwab aka TD Ameritrade Park in Omaha. The format is pretty simple this year, a double elimination bracket all the way through. Maryland just needs to avoid a 2 n BBQ showing and they will have a national seed locked up, but we know how the committee feels about Big 10 Champions (2021 Nebraska). The Big 10 is looking like all teams outside of Maryland and possibly Rutgers, will be fighting for a chance to extend their seasons via the AQ bid. Should make for an exciting tournament. All games will be televised on the Big 10 Network, which most of us do not have. I believe Big 10 Plus costs $15 for a month subscription. Also, FuboTV has a free 7 day trial which offers the Big 10 Network streams.

The inaugural Pac-12 baseball tournament is here and will be hosted in Scottsdale. The one we have all been waiting for. Up until this year, the Pac 12 awarded the 1st place team in the regular season an AQ bid, which held the conference at such a disadvantage. Teams were not given an extra opportunity to boost resumes. With that said, we now have late night Pac 12 After Dark baseball which should be an absolute treat at 10pm. The tournament will be on Pac12 Network, which is a pain in the ass to get access to. FuboTV offers Pac12 Network with their 7 day free trial. Also, SlingTV is offering one month sub at half price with an $11 sports package add-on for $28 bucks for a month with access to Pac12 and Big10 Networks. Championship game is on ESPN.

The Big 12 Tournament at Globe Life Park (Home of the Rangers) is a simple double elimination tournament. The Big12 is continuation of a mumble jumbled regular season where TCU came out on top with a 2 game separation between 1st and 6th place. This tournament will be highly entertaining as 5 teams will be fighting to boost their hosting resume. Tournament will be kicked off with an electric 9am shotgun start between Texas and Oklahoma State. Televised on ESPNU/ESPN+.

The FUN BELT tournament will be in Montgomery as a double elimination bracket with 2 play in games for the 7-10 seeded teams. Texas State is fighting for a hosting bid while Georgia Southern and Coastal Carolina could also be fighting for hosting spots with a big time week. This tournament has the making of chaos as so many teams have the talent to win this thing. Conf tournaments are all about lucky breaks and who is hot. Rarely does the best team win. All games will be on ESPN+. The bracket is in PDF format so I cant drag and drop it in here, just click the link and it will be there for you to see.

The CUSA tournament is an 8 team double elimination bracket in Hattiesburg at The Pete. Like the Fun Belt tournament, this one should be chaos as well as so many teams are fighting to extend their seasons, but most of them are extremely talented. CUSA will probably end up being a 3 bid league. Televised on ESPN+/CBS Network. The bracket is in PDF format so I cant drag and drop it in here, just click the link and it will be there for you to see.

Just click on each conference below to view their tournament bracket as they are continuously updated. Enjoy the week!