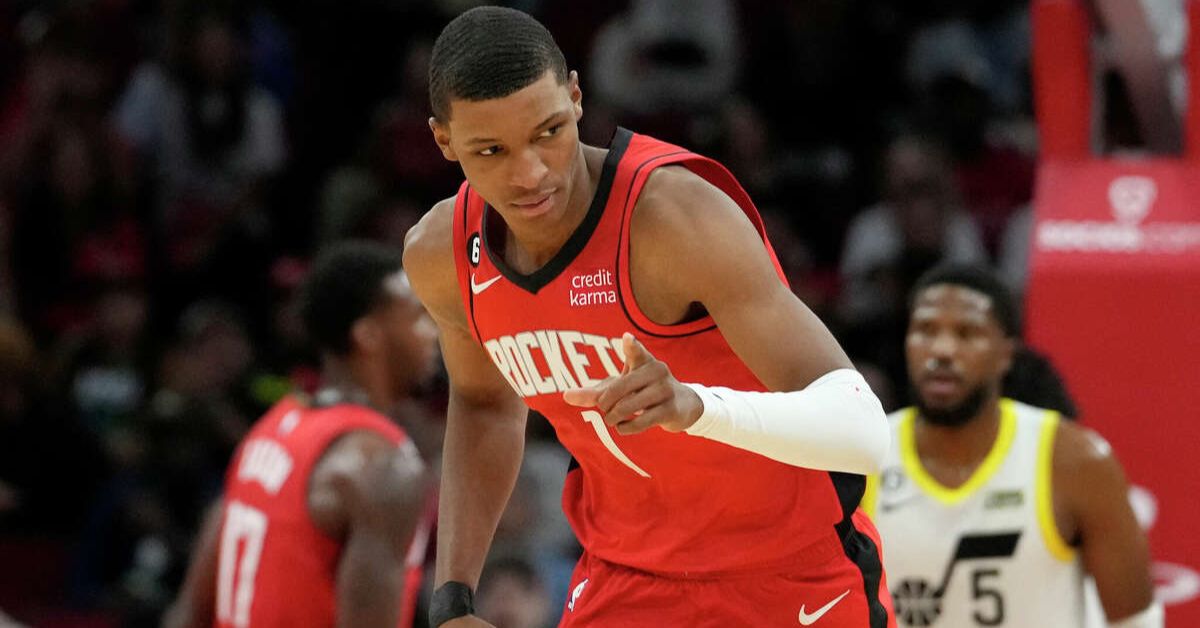 Once the final buzzer hit, I wasn’t sure if the feeling was elation or relief because, like The Rock once said, “FINALLY, THE ROCK(ETS) HAVE COME BACK…WITH A VICTORY! To cap off an evening that could’ve been mired by a sideline argument between Jalen Green and Jabari Smith Jr, the good guys pulled off the first Rockets win of the season.

The Utah Jazz came into the game undefeated at 3-0, while the Rockets were winless at 0-3. This was a game I felt was a must-win, due to the nature of the schedule, and because of the tired legs of the Jazz. The Jazz played an OT game Sunday evening and then traveled to Houston, so the Rockets had the advantage there.

Led by their big 3 of Jalen Green, KPJ, and Jabari Smith Jr the good guys were able to keep the Jazz at bay. Jalen Green, who may have felt a tad bit of pressure to perform on Filipino Heritage Night, certainly produced to the tune of 25 pts. He shot 9-16 from the field and 4-8 from 3pt land so the man was certainly “scorching”! As the “Rising Son” of the Philippines, he didn’t leave the Filipino contingent disappointed.

Kevin Porter Jr chimed in to the tune of a 26, 10, and 4 stat line that certainly looks good. However, I will say his playmaking was still questionable but he made his presence felt in other facets of the game. He stood out w/ 10 rebounds, as he made an impact on the boards, and his constant drives to the bucket were able to draw a plethora of fouls on Utah.

Jabari Smith Jr had himself a game, again! Although it felt like he was missed on open looks, when he was found, he made the Jazz defense pay for their lackadaisical defense. Jabari finished with 21 pts and 9 rebounds and had a day shooting! He shot 6-10 from the field and shot 3-5 from 3 point land. His defense, despite being mired by foul trouble throughout, had an impact while he was out there. With Sengun and Fernando out, Jabari took the privilege of being the 5 man and tonight was the perfect night to deploy that. That’s our rookie!

At the end of the day, my favorite stat of the evening is the fact that our big 3 shot ABSOLUTELY PERFECT from the charity stripe! Combined, they shot 18-18 and none bigger than the 4 clutch FTs from our top draft pick. To see that improvement will be absolutely huge moving forward. Although the Rockets didn’t play perfectly, tonight was a good night to get our first win and I couldn’t be happier.