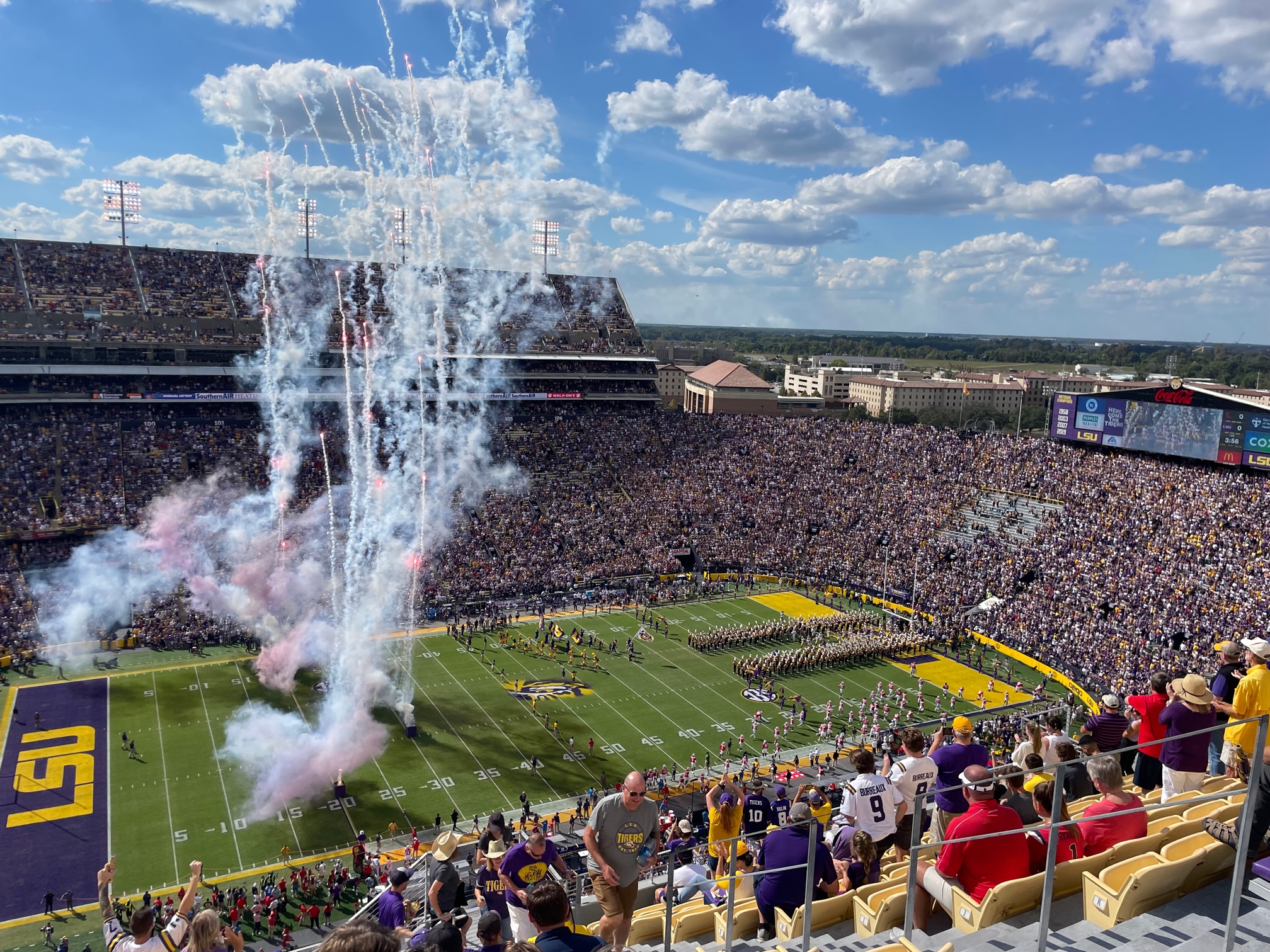 In college football there are generally a few places mentioned as the Holy Grail of tailgating destinations. The Grove in Oxford is legendary, but in my opinion, it is LSU that truly excels at the art of the tailgate and ranks as my top destination. I was lucky enough to head down to Baton Rouge for this SEC West matchup. A huge thank you to the entire DVA Tailgating crew for letting me join in on the fun and to my friend Adam for giving me a spot to crash at. It was an incredible weekend and I can’t wait to tell you all about so without further delay, let’s dive in.

Zach Rau and the DVA Tailgating Crew put together an incredible menu of food for this weekend but with a 2:30PM kick – that meant getting started early. Before the sun had risen on Baton Rouge, the tents were arranged, the coolers were filled with beer and ice, and the roux for the gumbo was being prepared. For the unitiated – a tailgate at LSU is an all day affair. It’s a strange feeling making your way into the quiet of a college campus at 6:00AM to lay the groundwork for an all-out tailgating extravaganza but with a ton of guests to accomodate there is no time to waste. Of course, this also meant the first beer of the day was cracked quite early.

When I say that this tailgate had everything you could possibly want, I mean EVERYTHING. While the food was being prepped the beer was flowing – everything from the cheapest to a little bit of craft beer as well. Tailgate games include the washers you see above as well as beer pong and more. Of course, this being an LSU Tailgate, plenty of liquor was also available as well – the centerpiece being an absolutely divine cocktail punch called “The Sea Serpent” dreamed up by Scott Hines which you can read all about in his fantastic newsletter over at Action Cookbook. It is a delightful yet dangerous concoction that will absolutely get you feeling prepared for a Saturday in Death Valley.

One thing to always remember about the tailgating experience – it isn’t a worthy tailgate without food and boy howdy does the food here deliver. As I mentioned above, Zach Rau put together one incredible spread of food that highlights some of the best culinary offerings in the state of Louisiana. The hard work and dedication he puts into serving guests at his tailgate result in dishes that could legitimately be served at restaurants and probably out perform professionals. Pork sauce piquant, chicken and sausage gumbo, and crawfish etouffee made up the menu and each bite was a little bit of South Louisiana heaven

After we had gotten our fill of the food it was nearly time to head into Tiger Stadium for the game. However, as is tradition at the DVA Tailgate a “Thunderstruck” circle was formed before we quickly realized that we would need two separate circles. One of the best renditions of the classic group drinking game ensued. It is tough to put in to words the communal joy of sharing such fantastic fun and food with incredible folks but I think the tweet of “Thunderstruck” below does one hell of a job at it.

There is nothing I can write here about Death Valley that hasn’t already been put in to words by someone more gifted at the craft than I am. Tiger Stadium is one of the most special environments in college football and though nighttime in Death Valley is always better – the crowd was very into this massive game against a ranked opponent. Ole Miss hopped out to an early 14-3 lead over LSU but the Tigers came roaring back in the second half with the thousands and thousands of fans in attendance powering them onto victory. Hearing “Calling Baton Rouge” blare over the speakers was the icing on the cake for an absolutely perfect Saturday of a college football experience in Death Valley. Of course, it wouldn’t have been a complete edition of the Tailgate Chronicles without one shoey from inside the stadium.

I truly can’t imagine a better tailgate experience than the one I had in Baton Rouge on Saturday – everything from the food to the drink to the company was absolutely top-tier. Thank you to the entire DVA Tailgating Crew – Zach, Adam, PodKatt, Joey, Billy, and anybody else I may be forgetting for allowing me to take it in. Thank you to Scott for being responsible for getting me to commit to coming to this game and thank you to everyone who showed up for this tailgate from all over the country – a list of people too long to name. It was an incredible experience and I can’t wait to be back in Baton Rouge again. The Aggies may have lost on Saturday but I couldn’t help feeling like I still won.