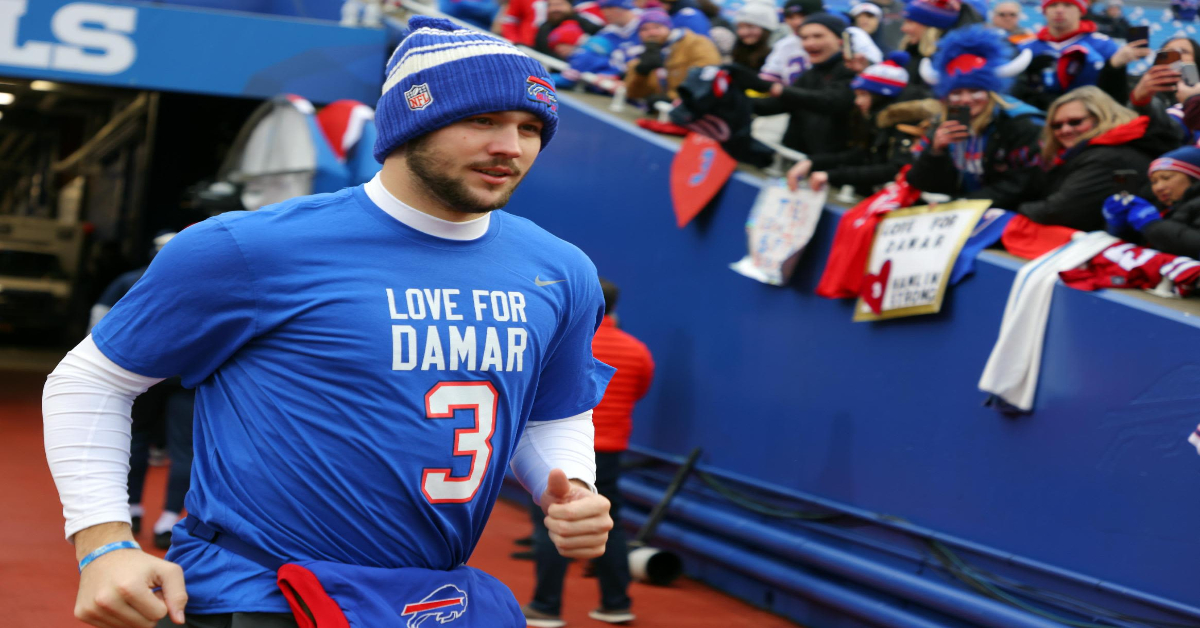 After 18 weeks of chaos, the playoff field is set. For some teams, like the Kansas City Chiefs, the path to the postseason was relatively straightforward and relaxing. For others, like the Seahawks and Dolphins, the final Sunday of the regular season came with stress that only the NFL create.

1. What a difference a year makes

One year after a 3-14 campaign that could only be described as embarrassing, the Jacksonville Jaguars are the champions of the AFC South and are headed to the playoffs.

In Week 18 of last season TIAA Bank Field in Jacksonville was littered with fans dressed up as clowns. An open and loud rebellion from the supporters that were forced to endure a season of Urban Meyer’s garbage. Just 12 short months later and that same stadium in Jacksonville was filled to the brim as Doug Pederson, Trevor Lawrence, and the Jaguars fought for the division title against the Titans.

It wasn’t easy. Give Mike Vrabel 11 bodies and something to play for and he’ll make a game of it. Late in the fourth it looked as if Joshua Dobbs and Derrick Henry were primed to pull off the upset. Sending a Jags franchise with seemingly nothing to lose home with what would have been a devastating loss, even for a team that overachieved on the season.

One play changed all of that.

General Manager Trent Baalke deserves credit, he pulled the plug on Meyer, hired Pederson, and filled the roster with adults that had real NFL experience.

Pederson took a broken team, united them, and equipped them with a real plan from week to week.

And finally there is Trevor Lawrence. A young man that came into the league with as much hype and praise as he did could have folded after a rough rookie season. Lawrence could have fallen back into some terrible habits at multiple rough points in this season, but he didn’t. More impressive than any bullet over the middle or heroic play on the run, Lawrence displayed the mental toughness that it takes to be a star QB in the NFL. Lawrence’s extreme talent and fortitude between the ears has earned him what will end up being his first of many playoff appearances. He still has plenty of shaky moments and this team is far from a finished product, but playoff experience will help this franchise in the future.

The front office, coaches, players, and fans should be sure to enjoy this one. After last season, they deserve it.

I’ve waffled on the Cowboys more times than I can remember this year. After a Week One loss to Tampa that saw Dak go down with a thumb injury it seemed as if the season was already on life support. Cooper Rush and some masterful defensive performances turned the tides and had Dallas looking like a real threat upon the return of Prescott. For the last few months Dallas has at times looked like an absolute juggernaut capable of tormenting teams on both sides of the ball. Other times, like on Sunday in a loss to the Commanders, Dallas looks like a team that has no juice outside of Jerry World with a turnover-prone QB and Mike McCarthy as a head coach.

As they should at this time of the year, all eyes turn to Dak Prescott. He’s the leader of the team, he’s the engine that makes them go. When Dak is on there simply aren’t many offenses that look more complete than Dallas. But Dak has not consistently been “on” and his “off” games are looking worse than ever before. For a multitude of reasons, Dak is forcing the ball into some airtight windows and NFL defenders are making him pay.

Prescott and the Cowboys now head to the playoffs as a 5-seed with more questions than answers. Can they take care of business against Tampa Bay? Can the defense dominate like it did at times this year? Can this team look explosive and win on grass? Can they avoid the dumb mistakes that they never seem to avoid?

But above all else, what are the Cowboys going to get from Dak Prescott? The NFC is there for the taking. At his peak, Dak is the best QB in the NFC playoff field. The Eagles are banged up and San Francisco is starting a seventh-round rookie at the end of the day. If this isn’t the year then the year may not come for Dak. He needs to make a run, right now.

3. Somehow, the Chicago Bears are on the clock

THERE IS NO QUIT IN LOVIE SMITH AND HIS HOUSTON TEXANS.

An absurd game of football took place in Indianapolis on Sunday. The Texans needed one final loss to secure the first pick in the draft. Seems easy enough. Here’s the thing to remember, the players and coaches that took the field in Indy do not give a hoot about that first pick. NFL games are played on television for the world to see. There is this thing called film and NFL players and coaches are judged by it. Money is made and lost down to down even in the most “meaningless” of games. So on Sunday the Texans went out and played hard. They played real bad, but they played hard. As they should have.

No lead (or deficit) was safe. Davis Mills and Sam Ehlinger… well they were certainly doing things. Plays — both good or real, real bad — were being made. With Houston trailing by seven on its final drive of the year, Mills decided it was time to make some magic happen. Mills converted a 4th & 12 to Brandin Cooks to keep the game alive, setting up a 4th & 20 play that you have to see to believe.

Oh but they were not done. As any eliminated team should in Week 18, Lovie Smith and the Texans decided it was time to either win or lose the game and head to Cancun. The following two-point play ensued.

Curtains. A mic drop from Lovie Smith, who was fired Sunday night by the Texans.

Just like that the Bears are on the clock, free to wheel and deal that first pick to whichever team wants to trade up and secure a potential franchise QB. Houston will still get a good rookie QB if they want one. They can still pass on a QB and enter the Caleb Williams sweepstakes if they want to.

The Houston Texans won a football game on Sunday, and that is OK.

The best part of season has arrived. Here are the matchups and a few brief thoughts.

Divisional games can get weird in the playoffs, don’t sleep on that factor. Something else to chew on, the road team and the No. 7 seed does have the better quarterback. San Francisco should be fine here, and look as ready as anyone for a trip to the Super Bowl, but the games are not played on paper. Let’s see what Geno has in store for the 49ers’ defense this time around.

I wrote about Herbert, Lawrence, and their similarities after Week 12. Two young quarterbacks each making their playoff debut in primetime? What a treat this one should be. I’m not going to go down the Brandon Staley Week 18 rabbit hole. I do not know why he played the starters as long as he did and will never understand it.

I do know that the Jaguars ROCKED the Chargers in Week 3. Justin Herbert was playing with Jello ribs at the time and LA suffered key injuries during that game. While all eyes will be on the scintillating quarterbacks, coaching will decide this game. Doug Pederson’s offense against Brandon Staley’s defense should be quite the chess match. High drama is likely on Saturday night.

These same two teams met in Buffalo a few weeks ago and provided one of the great games of the season. If Tua Tagovailoa is able to play, this could easily be the most exciting game of the weekend. However, Tua playing seems unlikely and the Bills appear to be in a nice spot to cruise to the divisional round against either Skylar Thompson or Teddy Bridgewater.

This is an epic Wild Card game. Not because both teams are capable of winning the Super Bowl or even representing the NFC in the big game, but because we as fans are almost assured of chaos with this matchup.

The Vikings have been playing nonsensical football games all year. I don’t suspect that will stop now at home against the consistently silly and fun New York Giants. Unusual things will happen in this game and I’m here for it.

Much like the game in Buffalo, the excitement for this game will hinge on who starts at QB for the road team. If it is Tyler Huntley, the Bengals will likely take care of business with relative ease.

If we get Lamar Jackson making his return from injury for a prime time playoff matchup against a division rival, oh boy. An injured Lamar returning just in time to save the season and go on a playoff run? What great theatre that would be.

The Cowboys have looked better than the Bucs for 90% of the year. The Cowboys have the way better offense, a superior defense, and (somehow) a more trustworthy coaching staff. Dallas should win this game.

5. Anyone see that kick return?

Six days after Damar Hamlin nearly died on the football field, his teammates were back in action.

What happened next could have only taken place at a movie theater, or at Orchard Park.

How can you not be romantic about sports?

Thank you to everyone that read these articles during the regular season. I will of course share more takes and gambling picks (big Week 18, by the way) as the playoffs unfold.