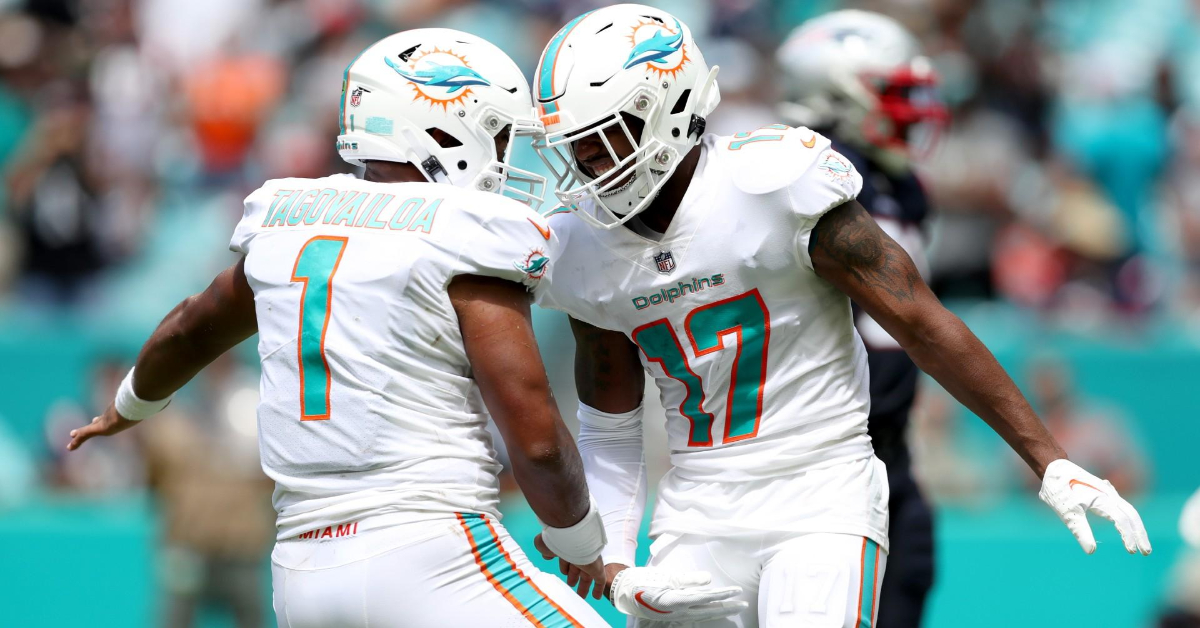 NFL Week 2 aka “Overreaction Week” is in the books. There were stunning wins, startling losses, and some “put some respect on my name” quarterback performances. As usual, I stepped up and did the chore of watching football all weekend long so you didn’t have to. Here are my takes.

1. We underrated Hill and Waddle as a duo

Neither Tyreek Hill nor Jaylen Waddle is underrated as individual talents, most people with eyeballs and a television know what that type of speed can do to NFL defenses. But the potential for what Hill and Waddle could do as a duo was not talked about enough. It took TWO GAMES for this brand new Dolphins’ offense to make a statement and look unfair. With two guys on the field that defenses and safeties must worry about every single snap, there are so many ways to create open throwing lanes for Tua. Take away the deep ball and Waddle is streaking across the middle of the field on a drag route. Try to eliminate underneath throws and Tyreek Hill is burning you for 60 yards over the top. If the opposing pass rush doesn’t get to Tua, there isn’t much the secondary can do to contain the fastest group of weapons that I’ve laid eyes on. Through just two games it’s clear that the ceiling of Miami’s offense and team need recalibration. Tua doesn’t have a cannon for an arm, elite pocket presence, or exceptional playmaking ability. But in THIS offense with THESE dudes at wide receiver, he often won’t need those traits. The Dolphins erased a 28-7 deficit on Sunday in Baltimore and did so in the blink of an eye. Tua threw SIX TOUCHDOWNS against the Ravens, the last of which found the hands of Jaylen Waddle and gave Miami a 42-38 victory.

The Dolphins are 2-0 and suddenly have the ability to score quickly and erase deficits. This is the type of win that builds confidence for a young team and quarterback. Keep an eye on what is going on in Miami this year.

As many predicted, the Rams bounced back from a bad Week 1 and jumped on the Falcons early. Allen Robinson was more involved, Cooper Kupp was Cooper Kuppin’ all over the field and all seemed well in LA. In the third quarter, the Rams stretched the lead to, wait for it, 28-3. Rams -10 ticket holders were already spending their winnings before things started to get weird. The gimmicky Falcons’ offense found life — not Kyle Pitts, this offense NEVER finds Kyle Pitts — and started to mount a Brady-esque 28-3 comeback. Drake London caught fire, a punt was blocked, and suddenly a Cooper Kupp fumble gave Mariota the ball with plenty of time to steal a win. But this is the Falcons we’re talking about, a 28-3 role-reversing comeback is simply too good to be true. Mariota was intercepted by Jalen Ramsey, sending the Falcons out of hollywood 0-2. I’d feel bad for the Falcons if Arthur Smith made that possible. But Smith continued his tough-guy act after yet another L by making a tasteless comment about fantasy football.

Hey Arthur, you’re literally the Falcons. You don’t win games anyway, maybe you should live a little and give the greatest TE prospect in NFL history a few targets.

Through two games Carson Wentz ranks 10th in EPA per play. Matt Ryan? 32nd. Oof. After an uninspiring tie in Houston, the Colts needed to get the season headed in the right direction against the Jags. Narrator: they did not. Matty Ice threw three picks and was sacked five times as the Jags rolled to a 24-0 shutout win. The Colts’ coaching staff, front office, and the team entered the year with pressure as the favorites to win the AFC South and have looked awful thus far. If Michael Pittman Jr misses an extended period of time with this quad injury, the offense might not get better anytime soon. The panic level is at a six because the division is so weak, but the eye test would have this at about a nine.

The defending AFC champs are 0-2 with losses to Mitchell Trubisky and Cooper Rush. Soak that one in. Cincinnati’s defense has been fine, that unit ranks 8th in EPA per play. But the offense can’t get going. Zac Taylor and Joe Burrow have yet to figure out how to consistently move the ball against cover 2 and are winless as a result. Joe Burrow is taking too many sacks. The Bengals’ O-line is not good yet again, but eventually, Burrow has to account for this and play smarter. Sacks are a QB stat and Burrow has taken 13 of them in just two games. Burrow’s best traits are his willingness to hang in the pocket and his knack for finding big plays. These traits are also his biggest weaknesses. Burrow is stubbornly holding the ball in the pocket waiting for a big play to become available down the field, but defenses are focused on taking away those chunk plays and Burrow doesn’t have all day with this offensive line. Zac Taylor also isn’t doing his QB any favors with his predictable play calling and lack of creativity in the passing game. All of the concerns that people had with the Bengals in the preseason are coming true. The good news is that the AFC North appears weaker than expected and if the Bengals can start to make adjustments, they can still make a run at a division title.

The theme of Hurts’ football career throughout college and the NFL has been his consistent improvement each and every year. Whether it be at Alabama, Oklahoma, or in Philly, this guy clearly puts his nose down and goes to work in the offseason. This hard work culminated in Hurts’ best NFL game to date on Monday Night Football. The Eagles beat the Vikings 24-7 and Hurts was spectacular all night. 333 yards passing, 57 yards rushing, and three total touchdowns. But it was more than the stat line for Hurts. The Eagles’ QB was making all the throws. Out-breakers, crossers, go-balls, Hurts was dropping dimes all over the field and the Philly crowd was eating it up.

Hurts completed passes to eight different players on Monday, indicating that he was progressing through his reads as opposed to just locking in on one specific target. If Hurts can continue to look this good as a pocket passer he will start to become unguardable due to his running ability. The Eagles and Hurts have taken this offense to the next level and Philadelphia undoubtedly has a contender to root for this season.

Mahomes told the truth, knowing who to start on KC is going to be rough.

The rookie wide receivers are going to be good again. Garrett Wilson, Chris Olave, and Drake London combined for 39 targets in NFL Week 2.

Goff, Amon-Ra, and Swift can all be counted on to produce behind that beast of an O-line in Detroit.

Buy Leonard Fournette. The opportunities and snaps are there and he understands the mission.

Baker Mayfield hasn’t killed the seasons of CMC and D.J. Moore owners yet, but he’s certainly trying to.

Yes, you are allowed to freak out about Derrick Henry.

The race for QB 1 is going to be awesome. Allen and Hurts were put on this earth to score fantasy points.

The Eagles and Bucs have certainly looked better than Green Bay so far. But the Packers’ offense showed improvement from Week 1 and I expect that to continue throughout the season. I didn’t think Hurts would be able to show me enough in the regular season to have me believing in him come the playoffs, but he looks pretty damn incredible…

Clear top three so far. Joe Lombardi’s dink and dunk offense is going to limit Herbert’s MVP campaign. My guy can still get the job done, but it won’t be thanks to his OC.

We’re going back to our roots as football fans with this god-awful Thursday Night Football game between the Steelers and Browns. Going from Herbert vs. Mahomes to Brissett vs. Trubisky is a kick in the nuts that only Roger Goodell is capable of handing out.

Bills-Dolphins and Packers-Bucs should both be excellent games on Sunday. That Miami crowd will be fired up for a huge showdown against the mighty Buffalo Bills. The highlights from that game should be incredible.

Sunday Night Football brings us the 49ers and the Broncos this week. It was a bummer that Trey Lance broke his ankle and is out for the year, he was going to be an exciting guy to watch develop. But in comes Jimmy G to face a Broncos team that is on thin ice with its fans after two extremely sloppy games to start the year.