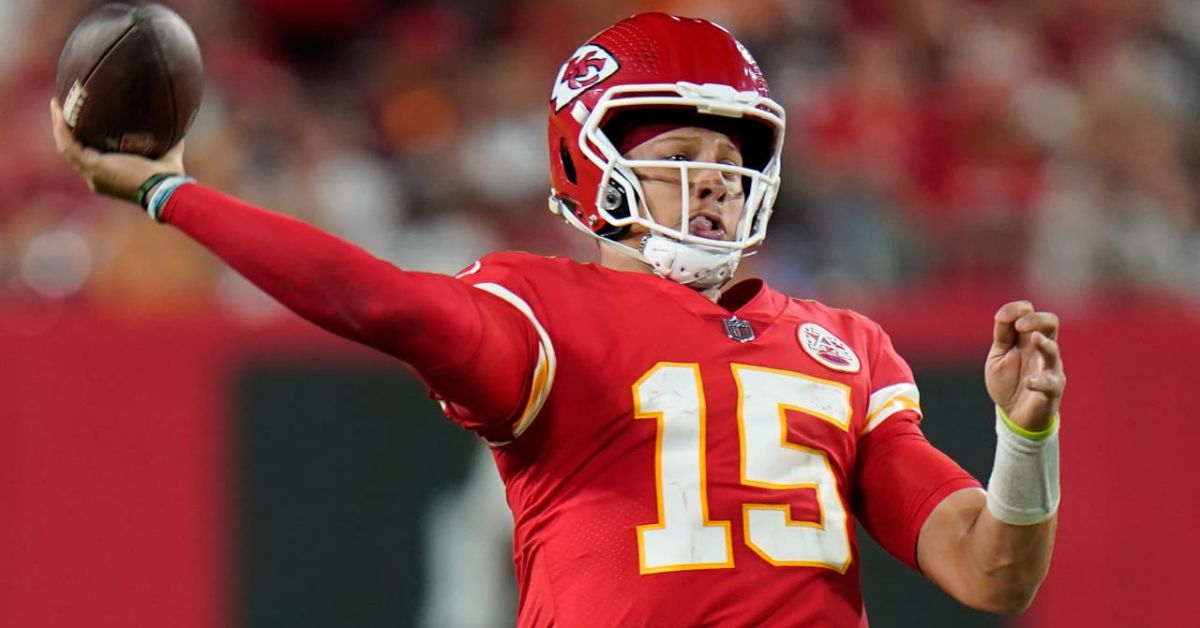 The first month of the NFL season was predictably chaotic. There are surprise teams, both good and bad. Injuries are already starting to mount for multiple contenders and the Mitch Trubisky era seems to be over in Pittsburgh. This week had a bit of everything. Here’s my NFL Week 4 reaction.

1. Mahomes flips the switch like nobody we’ve ever seen

Patrick Mahomes and the Chiefs returned to the site of their 2021 Super Bowl loss. Even though that game was over a season ago, Mahomes and Andy Reid clearly had revenge on their mind as they entered Raymond James Stadium to face Brady and the Bucs. A lot of times with Mahomes you can just tell that it’s going to be one of THOSE nights. The Bucs gifted the Chiefs a short field with a fumble to begin the game and in the blink of an eye, Travis Kelce was dancing in the end zone. Andy Reid had clearly spent some extra time in the offseason prepping for this specific matchup and constructed a beautiful game plan that Mahomes flawlessly executed. The Chiefs put together scoring drive after scoring drive on the road against the best defense in the NFL. Each time that KC kicked the extra point, Mahomes would come running onto the field screaming and firing up his guys. I’ve never seen a QB that flips the switch from “best player in the league” to “the other team actually doesn’t have a chance tonight” like Mahomes often does. Despite looking a step off at times, the Chiefs’ offense is first in EPA per play and Mahomes leads all QBs in that same stat. This may not be the scariest version of the Chiefs that we’ve seen, but when Mahomes is locked-in to that degree, the other 21 players on the field feel irrelevant.

2. Experience proved to be the difference in Jags-Eagles

The Eagles remained undefeated with a 29-21 win over the Jaguars on Sunday. This entire game was played in nasty rain with heavy wind and that weather had a massive impact on the Jaguars. Both teams were playing in the same conditions, but the Eagles looked relatively unfazed while the Jags played like a team that was discovering water for the first time. The weather wasn’t the only part where the youth vs experience difference was clear. The Jags jumped out to a 14-0 lead in the first quarter and looked primed to pull off yet another big upset on the road, but Philly didn’t flinch. This veteran Eagles team stayed poised and responded with 29 unanswered points. Trevor Lawrence fumbled four times and failed to show the poise that he has displayed all season. On the other side, Jalen Hurts avoided big mistakes and made plays when his team needed them. The Jags are loaded with talent and are a really good team, but they’re still young and they will remind us of that a few times like they did on Sunday.

3. The Bears and Falcons are attempting to set football back 30 years

The Chicago Bears and the Atlanta Falcons combined for 18 completions on Sunday. Marcus Mariota threw a pick and Arthur Smith responded by calling 14 consecutive run plays. Justin Fields has completed 34 passes… THIS SEASON… IT’S OCTOBER! JOE FLACCO HAD 37 COMPLETIONS IN WEEK ONE! The rest of the league is playing checkers while the Bears and Falcons play tic-tac-toe. Chicago and Atlanta are both 2-2, so perhaps the joke is on us, but Navy and Georgia Tech play on Saturdays man. The Bears and Falcons should be banished from the Red Zone channel until they start acting like adults and start completing more than 15 passes in a game.

4. The 49ers having the Rams’ number is still a thing

After the 49ers beat the Rams 24-9 on Monday Night Football, Kyle Shanahan moved to 8-4 against Rams’ head coach Sean McVay. It’s important to note that the Rams obviously won the biggest game between these two teams in the NFC championship last year, but in general, the Rams clearly still have an issue dealing with San Francisco. The physicality of the 49ers’ run game and pass rush has always given the Rams fits and that was the case on Monday night. A few big plays from Deebo Samuel and consistent pressure in the face of Matthew Stafford were all the 49ers needed for a comfortable win at home. Demeco Ryans is the defensive coordinator in San Francisco and will be a head coach by this time next year. A big reason for that is his consistent success against this McVay-style of offense. Ryans always seems to push the right buttons against the Rams and because of it, the 49ers appear to be the team to beat in the NFC West after four games.

Is Austin Ekeler back or did he just get to play the Texans?

Very small sample size, but it appears Tua’s absence will hurt Waddle far more than it will Tyreek Hill.

Arthur Smith is the biggest fantasy football villain…ever? Kyle Pitts is being used like an extra offensive tackle that is occasionally allowed to run around for fun.

We are in the midst of a historically bad RB year. It’s hard to feel confident with anyone not named Saquon Barkley or Nick Chubb.

The Lions are this year’s “jelly of the month club” team. The number one offense combined with a dead-last defense, that’s a gift that will keep on giving all year long. Start anyone that is remotely adjacent to a Lions game right now.

RIP Javonte Williams. He is out for the year and Melvin Gordon — along with his 78 fumbles — is now the clear guy in a broken Denver offense.

Rhamondre Stevenson is seeing more snaps and touches every week for New England. The Pats are slowly figuring out that new run game and Stevenson is a great trade-for candidate.

Make some extra room for Allen Robinson in the Kyle Pitts coffin.

Zach Wilson is back and he still loves Corey Davis. Frustrating times are ahead for Garrett Wilson and Elijah Moore owners.

It might be time to put down the TE position. I think we would all be ok if TE was removed and replaced by a FLEX spot. Nobody in the world should be forced to go through what Kyle Pitts owners are going through right now.

Rachaad White jumped from 9 snaps to 38… what’s going on in Tampa?

This may seem like a strange time to switch from the Packers to the Bucs, but I just wanted the Bucs’ wide receivers to get healthy and they are now. We saw flashes of the old Tampa passing game and I love that defense despite getting shredded by Mahomes.

Neither Josh Allen or Lamar Jackson set the world on fire in Buffalo on Sunday. Allen and the Bills got the comeback win and Allen remains the clear favorite for MVP after one month.

Not gonna sugarcoat it, the Week 5 slate is pretty bad. This is one of those weeks where fantasy football and gambling will likely provide more entertainment than the actual quality of the games. We have another London game this week which is always great. It’ll be fun to see how the Brits feel about Aaron Rodgers as the Packers face the Giants on Sunday morning. The best game of the week is luckily a great Sunday Night Football matchup between the Bengals and Ravens. Baltimore has major issues holding a lead right now and this game will play a big part in determining who wins the AFC North.