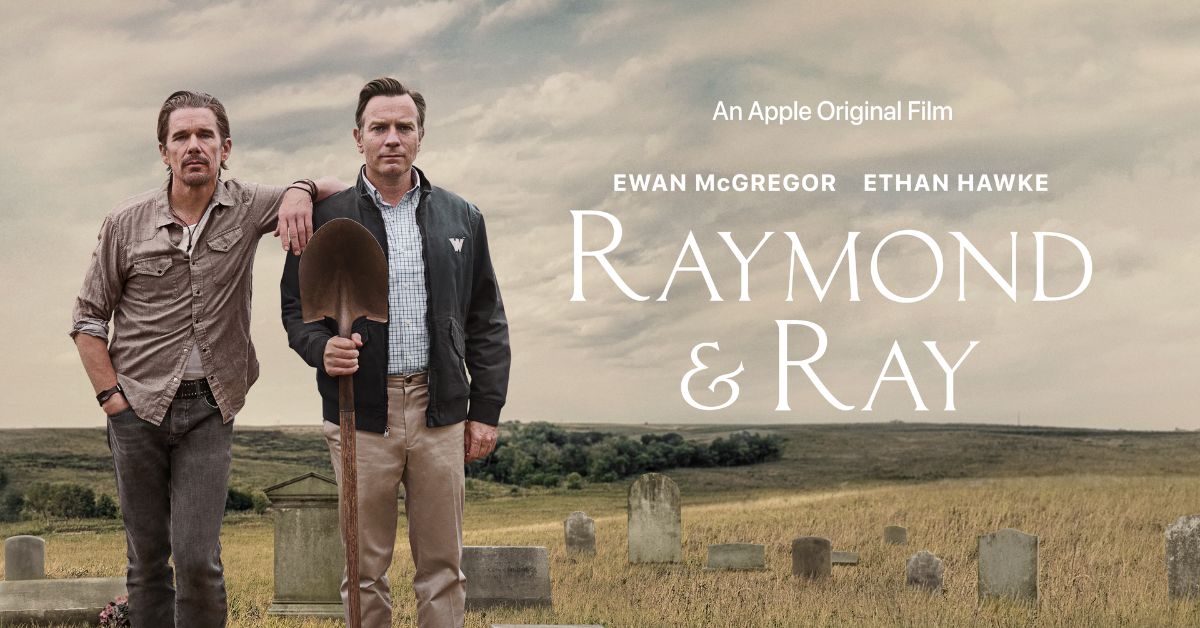 Raymond & Ray is a fairly quiet movie release for Apple TV+. The film stars Ewan McGregor and Ethan Hawke as the titular leads, but beyond that, you probably haven’t had reason to hear about it at all. There’s not much anticipation, if any, for the film from what I can tell. I was literally the only member of the press (I’m not gonna lie it still feels great every time I get to say that about myself because it’s accurate) to show up to the screening here in Houston. Reviews so far for Raymond & Ray have been extremely mild. It currently sits at 56% on Rotten Tomatoes and even the positive reviews rate it somewhere between a C- and a B. That’s about where I’d grade Raymond & Ray too. I’d personally consider it a C+ film overall. But to grade Raymond & Ray at all feels like it’s missing the point.

What is Raymond & Ray?

Raymond & Ray follows a pair of half-brothers who grew up with a terrible father. Somehow, they still each have a sense of humor, and his funeral is a chance for them to reinvent themselves. There’s anger, there’s pain, there’s folly, there might be love, and there’s definitely gravedigging.

Put another way, Raymond & Ray is the kind of quiet movie that most people can easily skip and never be bothered or feel left out. It’s not based on a book or any other IP. There’s no big action sequence. There are a few funny moments but it’s not particularly funny. The performances are strong, especially Hawke’s, but certainly not going to win any awards. There’s no big climax or super dramatic resolution, and the last-second plot twist spices things up a little bit but not enough to make Raymond & Ray a stand out. Especially not in a year like this where we’ve had incredible cinema all over the place from Everything Everywhere All At Once to Top Gun: Maverick to Barbarian.

If it’s mid, why were you so moved by it?

Even though the film itself is pretty much just “fine”, for reasons I can’t quite explain Raymond & Ray was one of the most moving films I’ve seen in a long time. Since it’s my job here to try and explain things about movies, I’m gonna try anyway. But it’s kind of hard so bear with me here.

Throughout the entire run time, Raymond & Ray really made me stop and think. Not about the machinations of the plot, which are very straightforward. You see a gun in Act 1, it goes off in Act 3, etc. But it made me think about…life. About grief. About forgiveness. About what defines us. About our capacity for change. About how our lives can mean different things to different people and how freeing that can be on the one hand and how devastating it can be on the other.

Is it enough to know that someone’s changed, or do they need to change specifically for you?

How can you truly make amends with someone you’ve hurt so deeply and for so long?

What do you say when everyone tells you they’re “sorry for your loss” in regard to a man, your father, whom you hate but they all love dearly?

Where are you supposed to put all the hurt and anger that’s built up inside of you when the person responsible for it dies? Can you bury it with them? Should you?

I walked out of that empty press screening of Raymond & Ray and I sat in my car in silence for 20 minutes asking myself big questions like these. I didn’t come out with any easy answers. The film clearly doesn’t have its own answers either, and ultimately that holds Raymond & Ray back from being truly great. The barrier to entry is low with it being on Apple TV+, but even with that, I can’t tell you in good faith that you need to watch this movie. I can’t even promise that you’ll enjoy it if you do. But I can tell that writer/director Rodrigo García is working through these issues himself. And ultimately, that’s what I’ll remember about Raymond & Ray.

Sometimes mediocre art can ask us the big questions and energize us to go out and find the answers ourselves. Isn’t that the point?

Grade: C+
Recommendation: Check it out if you’ve got Apple TV+ and some time to kill. But if not then skip it and just go meditate on big life questions. Or talk to a therapist or something. Figure out some tough life shit.