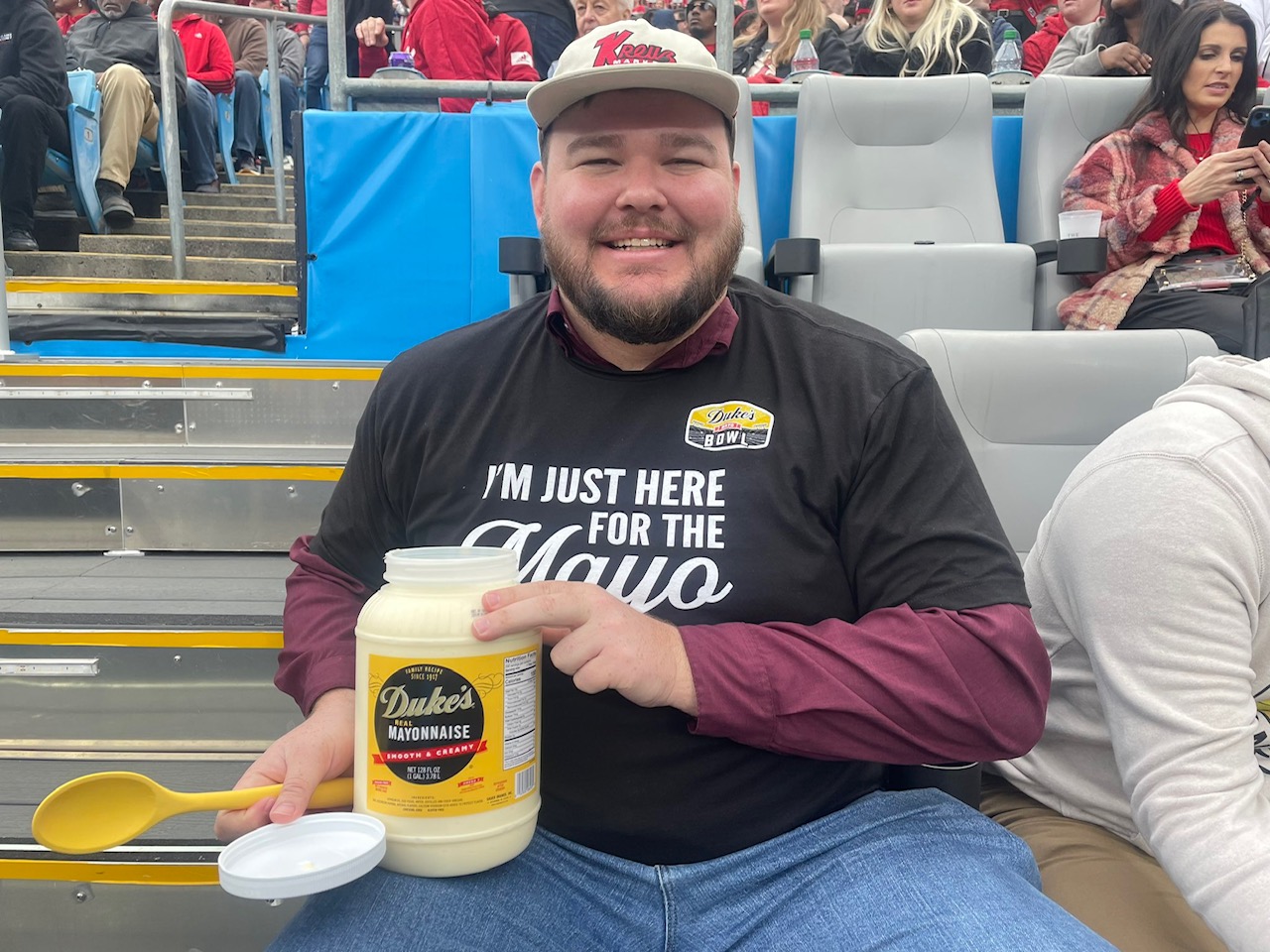 2022 was a year of doing a lot of booking trips and figuring out the logistics later. The Tailgate Chronicles were essentially built on that premise, as was the Send
Jay Away Challenge. I love college football and to have the opportunity to attend games as a fan is something I treasure immensely. That’s why when the team from the Duke’s Mayo Bowl reached out to me on Twitter asking me if I’d like to put on an exhibition of sorts it was an incredibly easy yes.

One little direct message on Twitter was all it took, and I was secretly agreeing to fly from Houston to a city I’d never been to before to watch two teams that I had no tie to play each other in the Duke’s Mayo Bowl. Sure, I had to worry about finding time and money to make the event a reality, but that was an issue for another day.

Within a week I had booked a flight to Charlotte and kicked off the training to consume mayonnaise directly from a jar. I will admit to you all that as much as I love Duke’s Mayo it was a bit of an adjustment to go from using it on sandwiches to simply spooning it into my mouth. The training was extremely important so as not to let down the 999,999 fans of the Duke’s Mayo Bowl who came before me.

Like a fighter trying to cut weight, I followed a strict diet and game plan in the weeks leading up to my performance. I’ll drop the official plan later, but as a spoiler, it was heavy on mayonnaise.

The journey to Charlotte was not without hiccups. Finding a day off to fly was a struggle. Navigating an airport during the holidays was a part of the training I neglected. The flight itself was delayed an hour on the runway thanks to some storms in Houston. However, we did persevere and manage to make it to Charlotte the night before the Duke’s Mayo Bowl between NC State and Maryland.

As an aside, while the bit of Charlotte that I did experience was delightful, perhaps it is not the best idea to grab a few drinks the day before consuming mayonnaise from a jar. With a pounding head and empty stomach, I made my trek from the hotel to Bank of America Stadium along with a river of fans in red not quite sure what to expect.

I’d be lying if I said there weren’t some nerves ahead of the mayo consumption, but the moment I walked into the stadium, I couldn’t help but just soak in the environment.

There are those in the media who complain about the sheer volume of bowl games. I’ve never been shy about how much bowl week means to me but I’ve had to admit my bias as a former player. The Duke’s Mayo Bowl has provided me with another reason to fight for bowl games – a return to what sports are meant to be about.

Forgotten about in all of the talk about realignment and money and amateurism is the fact that football is supposed to be fun. The fans I spoke to on Saturday were all enjoying the Duke’s Mayo Bowl and the theatrics surrounding it. The players couldn’t wait to dump mayonnaise on the winning coach. Some would argue that the stakes weren’t high enough. I don’t care. It was fun!

From the opening whistle, there were all kinds of mayo-themed shenanigans. Fans were dipping all kinds of items into mayonnaise jars. The ESPN Broadcast crew even got in on the action. Finally, when the second quarter got underway, it was my turn to contribute to the spectacle.

Years of playing the actual sport of football and it was this moment that finally got me on Sportscenter during a college football game. A massive spoonful of Duke’s Mayonnaise later and my phone was blowing up. It really was a surreal moment to take in, especially with the stadium PA announcer pressuring me into another huge spoonful that did not go down as smoothly as the mayo itself but what a joy it was to play a part in that environment.

My duties weren’t done there as I also served as the spotter for the ceremonial mayo dump for the winning coach, Mike Locksley of Maryland, to ensure there wasn’t a repeat of last year’s accidental collision.

I think a lot of folks in the world of college football would do well to take a bit of inspiration from the Duke’s Mayo Bowl. I love this sport for all of the chaotic energy that surrounds it. I love it for the passion the fans have. I love it for the way these athletes love this game. But it is a game, and I think we forget that on occasion.

I am immensely grateful for the experience and can’t thank the team at the Duke’s Mayo Bowl enough for allowing me to play a small part in making the event stand out in a crowded field.

By distilling all of the chaotic energy, pageantry, and passion around the game into an incredible concoction, the Duke’s Mayo Bowl creates lasting memories for fans of college football. I’m no different, and I will be talking about my experience in Charlotte for the rest of my days.

There is a ton of awesome content on Apollo, in addition to college football – I’ll also talk MMA and NASCAR. If you want to give me a follow on Twitter, you can find me @CoachJayArnold.