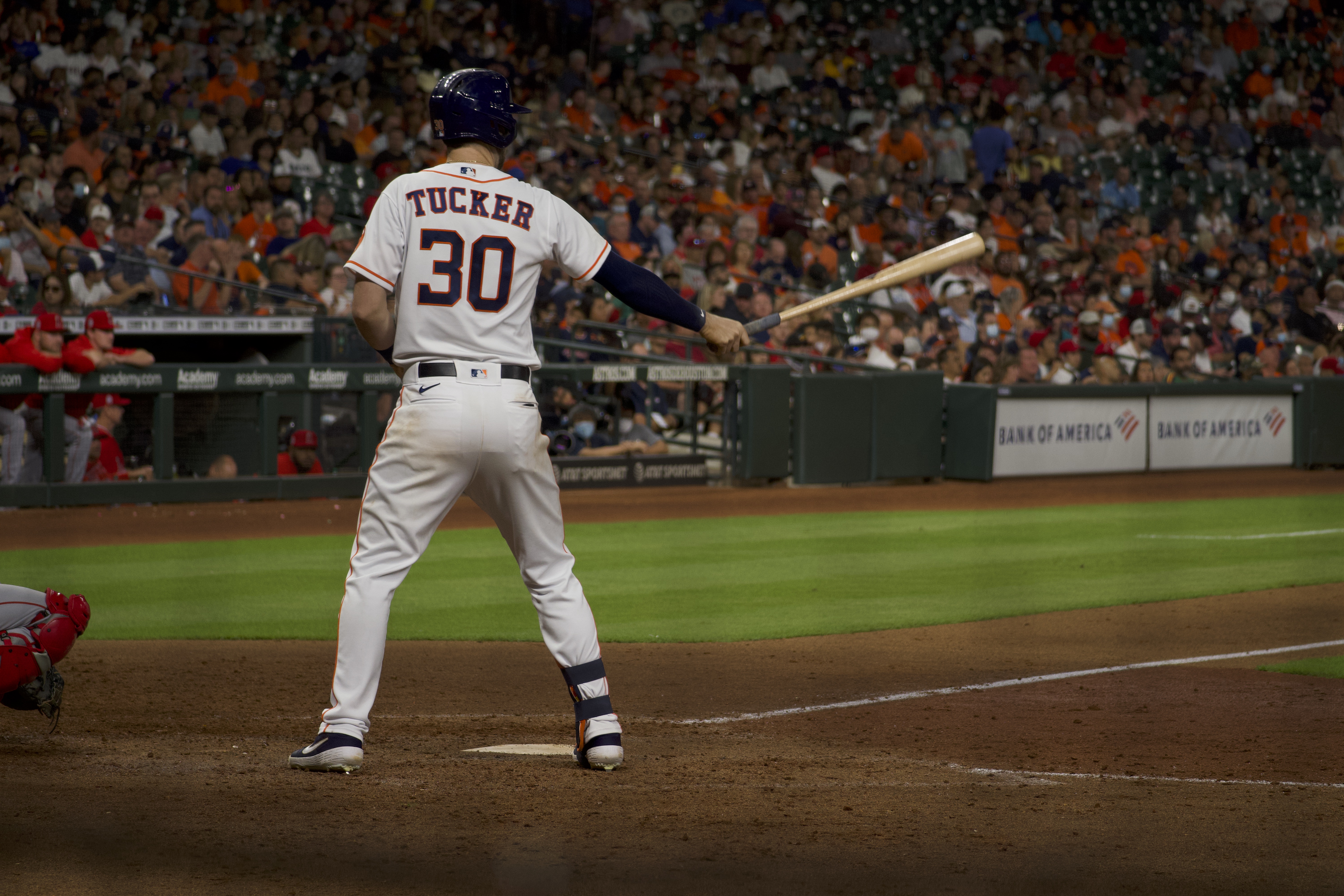 For the fourth time in six years a pennant will be flown in Minute Maid Park for eternity or until civilization collapses or the universe expands into nothingness. The 2022 Astros have an opportunity in front of them to etch their name in history as one of the greatest teams of all time and turn a pennant flag into GOLD.

Pitching, pitching, pitching that is the common theme of this Houston Astros bunch. What arm has impressed you the most the post and what arm would you call to put a fire out if you were Dusty Baker?

Spaceman – I continue to be impressed with Rafael Montero. I can’t believe he was basically a throw-in on the Toro deal with the Mariners. Astros pitching has unlocked another end-game weapon, which shouldn’t come as a shock to anyone who’s been paying attention to Miller & Murph.

Stoney – It’s not particularly new to us but Framber Valdez has impressed me the most with his consistency in his two starts. If there’s a fire to put out and I’m Dusty Baker I might literally not change a thing from what he’s been doing. Neris-Montero-Pressly have been lights out. If it ain’t broke don’t fix it.

Andrew – Bryan Abreu has really impressed me. His slider is devastating and his fastball is pure gas. If I needed to put a fire out, maybe it’s cliche but I’d turn to the closer, Ryan Pressly. He’s also looked excellent this postseason.

Astros UK – Such a tough question. There has never been a more lethal and water-tight entire Astros pitching staff top-to-bottom than the 2022 group. So many candidates. Of course, any reliever can suffer a postseason demise on just 1 pitch, such are the tiny margins – but I’ll go with Rafael Montero, I do worry about Dusty Baker over-using him though (see AJ Hinch with Harris, Will – 2019). Montero has been immense this season, though I could have gone for any of Héctor Neris, Bryan Abreu or Ryan Pressly as well. We are truly blessed.

OUR RESIDENT COLLEGE FOOTBALL PHILLIES FAN JAKE MYERS – For Rob Thomson and the Phillies, they have certified ace Zack Wheeler. Whenever he is on the mound the probability of a win significantly increases. A guy who has surprised me this postseason is the third man in the rotation, Ranger Suarez. Suarez has had a rollercoaster of a career. Started last year in the bullpen, and now is in the starting rotation and has been great in the home stretch. A guy from the bullpen to put out a fire is Seranthony Dominguez. He did throw a couple of passed balls to give the Padres a late lead in game 5, but let’s chalk that up to the weather. He has been a rock in relief, and will be needed to take on Houston’s “murderers row”.

Dez – Pitching wins championships, you can trot out JV – The Framchise – LMJ – Javy well series tend to become short. But the arm that has impressed me has been Neris, he’s been an amazing signing and been nails with the splitty.

The Phillies have some boppers on this squad, the NL East vibe and momentum. What are the vibes for you personally with 30 hours to first pitch?

Spaceman – Everyone who knows this Astros team will be cautiously optimistic going in. We can say “on paper” all we want but the fact is the Astros have been beaten by 2 AL East underdogs in their last 2 World Series appearances. I’m feeling good based on what I saw in the last regular season series of 2022 against Philly, so I’ll hang onto that for now. Stros in 6.

Stoney – I was super confident going into the 2019 series and then the Nationals crushed my spirit which has yet to recover. I’m cautiously optimistic with the 2022 squad and their ability to overcome the second hottest team in baseball.

Andrew – I’m feeling pretty good about the Astros chances. The key, for me, is keeping the Phillies in the ballpark. The Astros pitching staff has done a good job of that all season, so if they can continue to mostly avoid giving up the long ball, it’ll make things really tough for the Phillies.

UK- The NL East aspect doesn’t bother me at all, purely coincidental to previous years. Momentum is an issue but hey remind me which team has won 7 straight postseason games again going into this World Series? Harper, Hoskins and Schwarber (no disrespect to Castellanos) are undoubtedly dangerous but equally so were Judge, Stanton and Rizzo in the ALCS. Their effectiveness will depend entirely on how our strongest point performs, our pitching. I do however worry about ‘The 3 Monkeys’ – (1) our abysmal 3-9 home WS record; (2) Justin Verlander’s worrying 0 WS wins; and (3) our atrocious 0-4 WS Game 1 record. We must go all out in Game 1 to destroy The 3 Monkeys.

The Phillies Guy – Right now I am absolutely thrilled to still be watching baseball in October. I was in high school the last time the Phillies won the World Series in 2008, it was a magical run that we Philly fans thought would be duplicated and made into a dynasty. Unfortunately some bad luck, and running into some hot teams, left us Phillies fans disappointed. Over ten years of irrelevance and the Fightins are back! The vibes are immaculate, and the city is ready to take on the biggest dog in the park the Houston Astros.

Dez – The vibes are vibin. Take care of business at home and put all the pressure on them with a rookie lefty and a bullpen game looming in G3 and G4.

On Beyond the Diamond the boys mentioned they felt this team was different what say you?

Spaceman – This pitching, especially the arm barn, has been such a joy to watch. Put a blindfold on and point to any one of them – you’ll have someone you have complete confidence in to jog to bump to get the outs you need. In that regard, it’s different than any other Astros team we’ve seen in recent years. The offense clicks when they need to, and there’s a lot of guys in the lineup with the H-Town Clutch gene. More on that next.

Stoney – There’s a confidence that this team exudes that’s different than any other team. The 2019 team is the most comparable to this one when it comes to confidence and somehow this team is even better than that one. Top to bottom the lineup, starting pitching are relatively the same, but the bullpen is sooooo much better than 2019.

Andrew – This team is different. It’s probably the deepest, most complete team we’ve seen for this franchise. There’s still good depth and big bats in the lineup, but the pitching staff is chock full of studs, and this group is as mentally tough as they come. It’s a special team.

UK – Huge agree. HUGE, huge agree. This Astros team entered this season with many expecting a significant drop-off in performance following Carlos Correa’s off-season exit and, for a few weeks, it seemed like they weren’t sure who they were yet. Then Jeremy Peña hit that walk-off homer to dead-centre at MMP against the Blue Jays and it gave lift-off to the entire team for the season. The difference is this team is scrappy, this team fights for every inch, on every pitch, for every single out – with bat, ball and glove. The superb 2019 Astros were supremely talented and hit it all bar one thing – relentlessness and a refusal to lose. The 2022 Astros can beat you in any kind of ballgame and will adapt over and over and over mid-game to finally find that chance to go for the kill. They always believe that they can win and it’s a powerful quality. They will need to use it this coming week to achieve the ultimate goal.

The Phillies Guy – This Phillies team is different. Kyle Schwarber has been another leader outside of Bryce Harper, Castellanos and Brandon Marsh are huge pickups to round out the lineup, and the “Day Care” of Bohm and Stott have been contributing in key situations. The veteran support of Hoskins, Segura, and Realmuto has been vital. Finally, the Achilles heel of this team might have finally figured it out. During the last half of the year, the bullpen has been crucial in the success of this organization. This Phillies team, which struggled to finish games, is finding ways to win. They are having fun. As other organizations got the limelight they were “Dancing on their own”.

Dez – Their is a quiet confidence among this bunch and it ends with champagne hangovers.

Give me your prediction of the series and DAWG OF THE WORLD SERIES?

Spaceman – I’m going with Kyle Tucker. I’m looking for some spectacular catches and assists from RF, and I’m calling it now – 3 BOMBS in the Series. He’s been overlooked all season with Judge doing what Judge did i the regular season, it’s time for him to shine like the superstar that he is.

Andrew – I’ll say Astros in 6, and the dawg for me will be Alex Bregman. The man has been on fire, hitting .333 with a .975 OPS this postseason. Even with Jose Altuve, Yordan Alvarez, and Kyle Tucker struggling, Bregman has been a difficult out. I expect him to continue to deliver clutch hits in the World Series.

UK – Despite realising that what I do thousands of miles away from the action has ABSOLUTELY no bearing on the outcome of the games, I am extraordinarily superstitious. To the point of not predicting the Astros throughout this postseason. I will however, just as you’ve asked and it would be rude not to. I’ll say Astros in… 6? No idea on the number but I’m just desperate to win and I do truly believe Game 1 is gigantic. Dawg Of The World Series, eh? Hmm… I’m going for Framber Valdez, but I have a sneaking suspicion Jose Altuve is about to do something very, very special after his slump. LET’S GO ASTROS!!

Phillies Guy Jake – Phillies in 6, Bryce Harper is the dawg of the series. The World Series trophy makes its way down Broad once again.

Dez – Stros in 5. Justin Verlander gets 2 wins and the WS MVP.